Russia’s Prime Minister Putin arrived in the town of Pikalyovo, the Leningrad region, after crowds of the local residents took to the streets and blocked a motorway protesting over unpaid salaries. Three major enterprises of the town were shut down, and nearly all of the townsfolk found themselves unemployed. 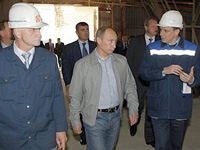 Putin harshly criticized the authorities of the Leningrad region upon his arrival in the town.

“If you can’t come to an agreement with each other to solve the problem, it will be done without you,” Putin said addressing top officials and the governor of the Leningrad region.

Putin forced the local authorities to pay the salary debts entirely - 41.2 million rubles - within only one day.

When the three major enterprises of the town were shut down, the locals lost their jobs and had their homes cut from hot water supplies: the boiler-house was shut down too.

“Why did you make everything look like a dump here?” Putin asked local officials during the tour of the troubled enterprises – the cement, alumina and the chemical works. The enterprises belong to different owners with Oleg Deripaska’s Bazel being the largest one of them (Deripaska used to be ranked as Russia’s richest men).

“The worst thing that they could do not to make me go there was to start violating the law. I think that it was done in collusion with those who did not want me to arrive in the town,” Putin said later during a meeting with representatives of trade unions in Moscow .

Oleg Deripaska, whose fortune was evaluated at $28 billion last year, was being very nervous during the meeting with Putin in Pikalyovo. He forgot to sign the contract about the delivery of supplies for idle enterprises to resume operations.

"Has Oleg Vladimirovich (Deripaska) signed? I do not see his signature. Come here and sign it," Putin said, throwing a pen onto the table.

Deripaska signed the document, stood up and left holding the pen in his hand.

“Give the pen back!” Putin told him.

"You have made thousands of people hostage to your ambitions, your lack of professionalism - or maybe simply your trivial greed," Putin told Deripaska and two other businessmen who own cement and alumina factories in Pikalyovo.

“Where is the social responsibility of business? Where is it? We keep talking about it non-stop. No one in the administration will ever convince me of the fact that the regional administration has done all they could to help the people. When I told you that I was going to come here, what did you tell me? You said that I shouldn’t, you said that you would show me a different enterprise. Why was everyone running about like cockroaches here before my arrival?” the prime minister said giving a heavy look to Leningrad region Governor Valery Serdyukov.

The problem has been solved. The enterprises in the town will resume their activities, the people will have their jobs and wages back.