The first and the last President of the USSR, Mikhail Gorbachev, believes that the now-deceased head of the Roman Catholic Church, Pope John Paul II, should be declared as saint. 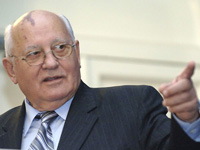 “I believe that he should be canonized. He was an amazing person. He was a humanist, I am ready to give him my number one,” Interfax news agency quoted Gorbachev as saying.

“He said that Europe must breathe with both lungs. That means that the east and the west of Europe must be its equal and valid parts. This is absolutely right,” the former leader of the USSR said.

Mr. Gorbachev also reminded the Pontiff’s words about the new world order. “He said that the new order must be more stable, just and humane. I think that I have repeated that quote of his a hundred times,” he said.

Gorbachev previously criticized the eastward expansion of the North Atlantic Alliance. He also claimed that the Western leaders were not keeping their promises which they had personally given to him. The Federal Republic of Germany, the USA and other Western countries promised Gorbachev after the unification of Germany in 1990 that NATO would not be expanding to the East, DW-World reported.

The Americans, Gorbachev said, did no keep their promises, whereas the Germans showed their indifference to it. “They were probably rubbing their hands seeing that they had fooled the Russians. As a result, the Russians do not believe the Western promises any more,” he said.

The Kremlin was pondering over the possibility for Germany to become one single state again from the beginning of the 1980s. “There were ideas about it back in the days when Brezhnev made me a member of the Soviet administration. I knew that it was history that separated Germany and that history would have the problem solved,” the former president of the USSR said.

Nevertheless, he added that both himself and German Chancellor Kohl thought of Germany’s unification as the question of the 21st century. “However, it just so happened that the Berlin Wall collapsed several months afterwards. “History is willing to give lessons to those who are too smart,” the former Soviet president said.