The summer holidays of Russian President Medvedev and Prime Minister Putin are usually referred to as work holidays in Russia. Even when the country’s leaders arrive in Sochi (a city on the Black Sea coast of Russia) they work there every day, conducting meetings and negotiations with Russian and foreign officials. The president and the premier can only have short breaks to enjoy the sun, the sea, the sand and other pleasures of summer vacations. 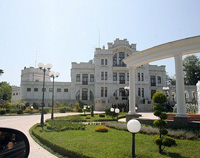 The presidential residence in Sochi – known as Bocharov Ruchei (Bocharov Stream) - is a historical place. The land used to belong to Russian wealthy merchant Bocharov before the Revolution of 1917. The stream, which the land was named after, does not exist anymore.

The building itself was built during the 1930s for summer holidays of top Soviet officials.

Leonid Brezhnev, the General Secretary of the Communist Party, was a frequent guest at the mansion. Brezhnev enjoyed having therapy baths in the healing waters of Sochi. Rumor has it that Brezhnev started dancing once after taking a few of those baths.

Vladimir Putin began visiting Sochi in the year 2000. Bocharov Ruchei was his favorite place in the city. When Medvedev took office as the president, he offered Putin to continue visiting the residence, although Putin turned the offer down and said that it was a presidential residence.

When the president, Putin transformed the tennis court of his predecessor, Boris Yeltsin, into a press center. The center now has a computer room, a conference room and a free bar with tea, coffee and sandwiches for guests and journalists.

It will be Medvedev’s second summer in Sochi. Supposedly, he will go on work holidays in August. When the president arrives in the city, he lives in the building on the beach.

Medvedev holds official meetings in the guest house, which is a cozy two-storeyed mansion smothered in vegetation. George H. Bush with his wife Barbara and George W. Bush stayed in the house during their visits to the city.

A funny incident happened when Putin gave George W. Bush a tour of the presidential residence. Putin showed Bush to the press center, where the Cossack choir was getting ready to perform for the presidents. When Bush entered the room, he saw women in their underwear pressing their stage outfits. The US president was standing there flabbergasted.

Putin has visited many of Sochi’s restaurants. Medvedev has not been downtown yet: his previous holidays coincided with Georgia’s aggression against South Ossetia.

The Russian prime minister has already opened the holiday season in Sochi. He had an official meeting with his Italian counterpart, Silvio Berlusconi in the city. Putin took Berlusconi to a fancy restaurant on the beach. The two prime ministers enjoyed dinner of Italian cuisine on the top floor of the restaurant.