Russians to be deliberately infected with swine flu

The Flu Research Institute in St. Petersburg began to recruit volunteers to be artificially infected with the swine flu virus which is currently raging in Mexico and the USA. 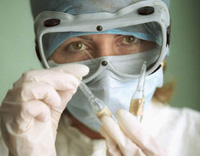 Russians to be deliberately infected with swine flu

Doctors will select six test groups of 20 people. Each volunteer will receive a benefit of 5,000 rubles ($150).

“The same practice was applied while developing the bird flu vaccine,” scientists from the Institute say.

Several days ago, Russian microbiologists joined their efforts in the fight against the contagion. The H1N1 strains were transported to Russian laboratories from Mexico on a special flight. Now experts must develop the vaccine against the deadly disease as soon as possible and test it on humans.

Now the Institute has already begun the strictest selection of volunteers ready to test a new medicine based on the cells of the swine flu virus itself.

“The remedy will be made on the basis of a ‘natural vaccine’, namely the cells of the virus H1N1 itself, - Anna Saminina says. – They will be weakened to the degree when they can’t cause overall pathogenic reactions in a human body. But they will help the organism develop matching antibodies. We employed this practice fighting against bird flu. At that time, we selected a group of volunteers as well that tested the vaccine on themselves. Everything went off well. We hope now it will be good too”.

Despite the fact that doctors have taken a special sanitary control of all charter flights from the USA and Mexico in all Russian airports, scientists doubt that Russia can avoid swine flu. The first outbreak of the epidemic will hit not only Moscow, but also large regional traffic centers.

“The World Health Organization announced that up to seven million of people may die of this contagion, - a sanitary official in Novosibirsk Andrey Fedyanin says. – All passengers arriving from Mexico are examined for flu symptoms. Unfortunately, it cannot stop the virus. An infected individual may have no fever during the first week”.