Russia will test the new Nerpa nuclear submarine again on June 15-20, The Kommersant newspaper wrote. The previous tests of the nuclear-capable submarine ended with the death of 20 people. 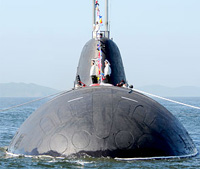 The submarine has now been prepared for a new stage of tests. The submarine was built for the Indian navy. The director of the Amur Shipyard, where the submarine was built, said that the fate of his company fully depended on the order from India. The company is 36 billion rubles in debt at the moment. Russia’s Defense Ministry owes 2.4 billion rubles to the Amur Shipyard: 1.9 billion of the amount is the debt for the reconstruction of the Nerpa after the tragic incident.

The Amur Shipyard is the largest ship-building enterprise in Russia’s Far East. The company was formed in 1936. It has built the total of 270 vessels, including 56 submarines.

Prime Minister Vladimir Putin said on May 11 that the Russian government would assign 2.5 billion rubles and over $400 million to restructure the company’s debts.