Russia must take decisive action in the Koreas 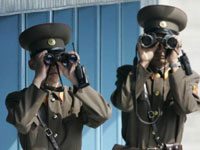 Russia must take decisive action in the Koreas

Russia is presently facing a very interesting and very lucrative situation in the Korean peninsula.

Since the defeat of Japan, the peninsula has been split between North and South Koreas, a split that continued after the failures in the Korean War, by both sides, to bring unity. Fast forward to the modern day, and this split is proving very difficult for Russia's interests.

Several issues are effecting Russia, due to the split. One of the prime, that most any casual observer will notice, is the presence of US troops. While in and of itself, they pose little threat to the Russian mainland, they are there now less to protect the South Koreans from the North Koreans and more to ensure that the status quo of the divide maintains and thus Russia's disadvantages.

But what are the disadvantages?

Well one obvious disadvantage is the undue US influence in the region which directly impacts Russian trade interest with such nations as Japan, South Korea, Taiwan and on south to even Australia. As long as the Koreas are separate, this influence will continue.

Another is the continuous influx of N. Koreans political and economic refugees into the Vladivostok oblast. While seeking freedom from the oppressive and secretive regime in N. Korea, these people place undue strain on Russian resources in the far east. Furthermore, any results of nuclear or chemical warfare will follow the air currents north, thus into Russia.

The main disadvantage, however, is purely petro-economics. With a divided Korea and constant turmoil, it is an impossible dream to run a Russian pipeline or two down the length of the peninsula and feed not only Korea but the lucrative Japanese market as well. If for no other reason, this is reason enough for the US to make sure that tensions remain high, close to boiling, but are never resolved.

What must be done?

Special Forces and tactical strikes must be used to liquidate the nuclear threat. The Americans will have little choice but to sit still and eventually take their cue to leave the nation (something that must be established along side the South Koreans, by the Russian government, well before hostilities begin). If the Americans move to force South Korea to stop, they will be portrayed and viewed as hypocrites and back stabbers of one of their oldest vassals.

After the level of rhetoric it has piled upon the North Koreans for decades, it will have little choice but to sit back and watch its status quo destroyed and then little excuse to continue to occupy parts of a unified Korea.

Japan will do nothing but sigh a breath of relief and await the increased Russian trade. The biggest obstacle to this is and will be the Chinese. They also benefit greatly from having their puppet in North Korea. However, as US-Chinese tensions rise, the Chinese will also come to see the advantage of not having the Empire so close to their own shores.

As Russia is, already, the main arms supplier for South Korea the issue of logistics will be a rather easy one. Russian T-80s are facing old Soviet T-55s. Arms and other trade are just waiting to blossom fully with a unified Korea, under the power of the South Koreans.

This move will even ease the pressure of the illegal immigrants streaming north. Furthermore, this will create an incredible market for Russian investment. The Koreans, due to their long history, mistrust the Japanese and Chinese and Russia will be seen not only as a strategic ally but also a more neutral power.