President Obama and President Dmitry Medvedev are going to open negotiations on a treaty that could reduce nuclear arsenals of both countries by one-third. They called it the necessary actions "to move beyond Cold War mentalities" in relations between the two countries. 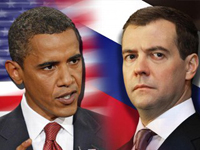 The agreement to undertake the most significant arms control talks in more than a decade emerged from the first face-to-face meeting between the two leaders, and included a promise by Obama to visit Moscow this summer to pursue the talks.

"Over the last several years, the relationship between our two countries has been allowed to drift," Obama said. "What I believe we've begun today is a very constructive dialogue that will allow us to work on issues of mutual interest."

The schism has developed over issues such as NATO expansion into countries once part of the Soviet Union. It soured even further last summer when Russian troops fought a war with Georgia, a U.S. ally.

Wednesday's consensus on the need for new nuclear weapons talks was the most concrete expression yet of the Obama administration's decision to opt for improved relations with Russia rather than greater confrontation.

In turn, Medvedev said he is prepared to cooperate on nonproliferation, among other issues, sfgate.com reports

"What I believe we've begun today is a very constructive dialogue that will allow us to work on issues of mutual interest," Obama said after the private meeting, held on the eve of the G-20 economic meeting. He announced he would be traveling to Moscow in July for a summit, Washington Post reports.

Medvedev, a lawyer by training who is showing signs of trying to emerge from Putin's shadow, said, "I can only agree that relations between our countries have been adrift over the past years."

"There are far more points in which we can, where we can come closer, where we can work, rather on those points where we have differences," he said.