The current economic crisis will be a lot harder than the financial collapse of 1998, a recent report from the World Bank said. WB experts believe that Russia will have to deal with severe problems as a result of the crisis. The economic growth in the country will decline considerably and the recovery will take a much longer time in comparison with the critical period of 1998, when Russia declared default. 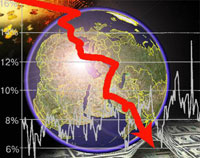 As the crisis continues to spread to the real economy around the world, initial expectations that Russia and other countries will recover fast are no longer likely," the World Bank said in its latest Russian Economic Report.

The World Bank believes that the unemployment level in Russia would grow to 12 percent against 6.3 percent in 2008. The level of poverty will reach 15.5 percent, which will be 2.8 percent higher than it was before the crisis.

The WB forecasts a 4.5-percent decline of the Russian economy in 2009. The year 2010 will be characterized with the zero growth of the GDP. The home demand will drop considerably, whereas the general social and economic situation will aggravate too, WB specialists said in the report.

WB specialists also said that Russia’s insignificant foreign debt did not impose any restrictions for borrowing. In addition, Russia remains a solvent country that receives considerable income from oil and gas imports even under the crisis conditions.

As for the world economy, it is expected to suffer a 1.7-percent decline. The volume of world commerce is expected to decline by 6.1 percent, but the world GDP can grow by 2.3 percent in 2010.