Russia intends to create Arctic troops to maintain security of the Russian part of the Arctic Ocean under the conditions of the current political situation in the world. The region is said to become Russia’s leading strategic base by 2016, The Kommersant newspaper wrote. 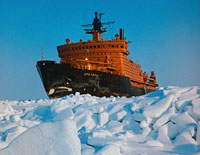 The document posted on the official website of the Russian Security Council said that the Arctic troops would be set up to maintain the military security under various conditions of the military and political situation. The document also envisages the establishment of the Coast Guard system in the Arctic region.

Russia wants to take the region under the control of the nation’s Federal Security Bureau. The strategy stipulates the border control of the region and the organization of border zones in the Arctic zone of the Russian Federation.

The former head of the Russian Federal Security Bureau, Nikolai Patrushev, visited the Arctic and confirmed that Russia would have to compete with other countries in defending its interests in the region. The publication of Russia’s Arctic strategy coincided with Norway’s claims regarding the military drills in the Arctic waters. Official spokespeople for NATO said that the alliance was not viewing Russia either as an enemy or a problem. They only said that NATO was concerned about the growing navigation in the Arctic against the background of the global warming.

Spokespeople for Canadian and Norwegian ministries for foreign affairs said that they would release their comments about Russia’s Arctic strategy only after they analyzed it in detail.

Artur Chilingarov, the special representative of the Russian president on Arctic affairs, stated that Russia must fully defend its borders and sovereignty.

All materials required to legalize the exterior border of Russia’s Arctic region are to be collected by 2010.