An ice cream making company from Yekaterinburg, Russia, was criticized over the advertisement of its ice cream with the use of Barack Obama’s image. The slogan of the chocolate-in-vanilla ice cream titled as “Duet” says: “The Flavor of the Week! Black in White!” The image of a black man standing against the background of the Capital Hills was considered a manifestation of racism. 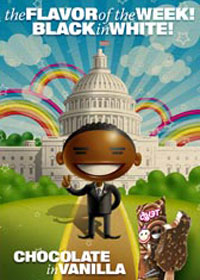 The scandal occurred after the ice cream advertisement appeared on the Ads of the World website. The blogger, who posted the ad, asked everyone to say if they considered the ad racist or not. Many people gave positive answers to that question.

A spokesperson for a Moscow based human rights organization told Sky News that the image could spark racist sentiments even if it was not carrying any aggressive message in it.

Voskhod Company (Sunrise), which designed the campaign, said that the image was not meant to carry any racist meaning in it. A spokesperson for the company said that the picture simply marked the presence of the black president in the White House.

Andrei Gubaidullin, the author of the advertisement, told AFP that his campaign was not linked to racism, because Russia, unlike the West, had a different point of view about ethnicity.

“This is not racism for Russia. It’s just fun,” the creative director of the advertising agency said.

It was not the first time, when Russian advertisers used the image of Barack Obama after he took office as the US President. For example, the image of the black president was used in Moscow to advertise tanning salons and a chain of dental clinics. In Rostov, the image of a black man, who looks like Obama, is used to advertise men’s shoes.

It is worthy of note that pre-election Obama condoms (“Not for the typical white guy”) are still available in the United States. “These are uncertain times. The economy is a ball-buster and the surge went flaccid. But now there’s Obama condoms, for a change you can believe in,” a message posted on obamacondoms.com says.