Russian deputies want Putin up on the mat

The factions of the Russian Parliament, the State Duma, submitted three questions to the Regulation Committee, which they prepared for Prime Minister Vladimir Putin. Each of the factions asked three questions. Putin will have to answer the questions during the annual report to the parliament on April 6. Russian deputies are interested in the anti-crisis measures of the government. 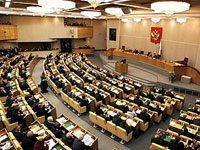 Russian deputies want Putin up on the mat

The Communist Party of the Russian Federation was the first to submit its questions, The Vedomosti newspaper wrote. The communists want Putin to tell them what the government was doing and which actions it plans to take in the nearest future to prevent the growth of communal tariffs. They also want to know why the government is unwilling to provide free medical healthcare services and hot food at schools under the conditions of the crisis.

The communists wondered if Putin was aware of the fact that Russia’s three major banks – VTB, Sberbank and Gazprombank – had spent 1.5 trillion rubles to purchase their own shares and currency in spite of the fact that the funds were assigned to support the real sector of economy.

The Liberal and Democratic Party of Russia (LDPR) wonders whether the government was going to freeze the tariffs of natural monopoles. Liberal Democrats are also worried about the fate of the Russian enterprises that had raised currency loans and faced bankruptcy over the growth of the dollar and the euro against the ruble.

Just Russia party asked questions about the fate of its legislative and anti-crisis initiatives.

United Russia wonders about the toughening of discipline in the structure of power agencies. The ruling party wants to know whether the government is going to give any priority to science-intensive technologies. United Russia also asked Putin to report on anti-unemployment measures of the government.