Ukraine's parliament has dismissed Foreign Minister Volodymyr Ohryzko, who threatened to expel Russian Ambassador Viktor Chernomydrin over an interview in which he said it was "impossible" to agree on "anything" with Ukrainian leaders. 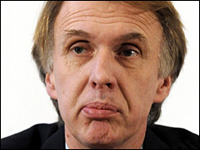 The dismissal of Volodymyr Ohryzko, an ally of President Viktor Yushchenko, followed three weeks after the finance minister resigned, citing a falling-out with Prime Minister Yulia Tymoshenko over economic policy.

The global crisis has battered Ukraine's economy, with industrial output down more than 30 percent year-on-year, negative growth of 6 percent expected in 2009 and the hryvnia currency losing 50 percent of its value at one point last year.

"This dismissal will lead to yet more confrontation between the president and prime minister," said analyst Volodymyr Fesenko of the Penta think tank.

"But the main problem will be for the future of the coalition. The situation could become critical and explosive for the coalition and lead to a split or even its destruction."

Stalemate in parliament, rooted in deep personal animosity between erstwhile "Orange Revolution" allies Yushchenko and Tymoshenko, could hinder passage of legislation needed to tackle the crisis, including amendments to a budget criticised by the IMF and laws supporting the banking sector, Reuters reports.