Rejection of USSR’s victory in WWII should be punishable, Russian minister says

Sergey Shoigu, the head of Russia’s EMERCOM, put forward a suggestion to pass the law that would stipulate criminal responsibility for rejecting USSR’s victory in the Great Patriotic War, Itar-Tass news agency reports. 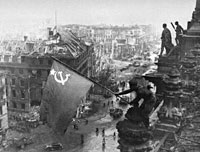 Rejection of USSR’s victory in WWII should be punishable, Russian minister says

“I believe that our parliament needs to pass the law that would stipulate criminal responsibility for those denying the victory of the USSR in the Great Patriotic War,” Shoigu said.

The minister stressed out that there was a number of countries on the post-Soviet space that reject both the results of the Great Patriotic War and the deeds of the Soviet nation in it. The law, the official added, would allow to protect Russia’s history.

“The presidents of several countries who deny that would not be able to come to our country unpunished, and the mayors of several towns would think twice before they decide to dismantle monuments [to Soviet warriors],” he added.

The minister, who acts as a co-chairman of the Supreme Council of Russia’s ruling party United Russia, pointed out that some countries had legalized criminal responsibility for the rejection of Holocaust. This responsibility is in effect in a dozen of European countries including France, Switzerland, Belgium, Poland, Austria, Romania, the Czech Republic, Germany and others. A person, who denies Holocaust in those countries, is likely to be sentenced up to five years in jail.

“It goes without saying that there are obvious facts which can not be denied. However, as experience shows, some dishonest politicians and organizations speculate on denying obvious facts for the sake of their own political dividend. Therefore, this suggestion deserves attention from this point of view,” Anatoly Kucherena, an official with the Public Chamber, told Interfax.

Vladimir Zhirinovsky, the leader of the Liberal and Democratic Party of Russia, said that the bill about the denial of the USSR’s role in the Great Patriotic War would have many chances to be approved if submitted to the parliament.

“The revision of historical events is a new form of the cold war. Millions of our soldiers were killed, and now they want to tell us that the USSR never participated in that war. This is monstrous,” Zhirinovsky said.

The notorious official believes that it would be quite possible to back up the issue with the legal base to make those, who make such statements on Russia’s territory, feel responsible.

“This goes for the mayor of Tallinn and for the president of Ukraine. We must protect our victory, this position is right, and we will support it at the voting in the State Duma,” Zhirinovsky said.

Vasily Likhachev, deputy chairman of the International Affairs Committee of Russia’s Federation Council, said that the head of Russia’s EMERCOM was probably gripped with emotions when he formulated his idea to the press.

“I believe that Sergey Shoigu’s statement, which he made at the meeting with the veterans of the Battle of Stalingrad, was based on political and emotional reasons,” Interfax quoted the official as saying. Likhachev emphasized that the USSR’s decisive role in the Great Patriotic War was an unquestionable fact admitted on all hands. He continued with saying that several Western countries, particularly the Baltic States, found themselves involved in ideological and informational wars after the collapse of the USSR and the rise of the new Russia. “They have developed an aspiration to distort history and display a hostile attitude to Russia and to Russia’s history in general,” Likhachev said.

Mikhail Kapura, deputy chairman of the Committee for Legal and Court Issues, said that he could not share Sergey Shoigu’s opinion. “With all my respect to Mr. Shoigu, who is one of our best ministers, I cannot share his views on the matter, and I think that it is unduly to introduce criminal responsibility for denying the victory of the USSR in the Great Patriotic War because this is an undoubted fact,” Kapura said.