The decline of the Russian ruble continued on the Moscow Inter-Bank Currency Exchange Wednesday, February 18, which marked the end of the short stable period for the Russian currency. The dollar went up to 36.43 rubles per dollar this morning, which was 80 kopeks higher than the official dollar rate in Russia . Thus, the official dollar rate has set a new all-time high against the ruble. 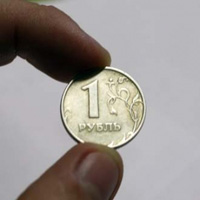 The euro gained 25 kopecks to 46 rubles per one euro.

The current record of the US currency will most likely be not the last one in 2009. Merill Lynch experts said the dollar may grow to 45 rubles by the end of the year against the background of the dollar’s growth against all basic world currencies. Russia’s Central Bank will not be able to support the ruble in the longer term, which will send the ruble plummeting against the dual (dollar/euro) currency basket.

The Central Bank has taken a number of effective measures recently, but the ongoing strengthening of the dollar, the risks of the banking crisis in Russia, and the decline of the interest on the part of global investors may eventually result in the reduction of the ruble rate by the third quarter of 2009, Merill Lynch experts said.

Konstantin Sonin, a professor of the Russian Economic School believes that Merill Lynch experts are partially right. “The recession and the low oil prices will be sending the ruble down the hill during the year,” he said in an interview with Utro.ru website. On the other hand, he added, the Central Bank must have enough reserves to keep the ruble on the previously specified level of 36 rubles per one dollar, if no drastic changes happen to the oil prices.

Other Russian experts acknowledge that the present-day currency market in Russia is too speculative. The market has been rushing about for quite a while, which leads to considerable fluctuations. Many rushed to buy dollars and euros in the beginning of the year. When the market approached its limit, market members stopped selling rubles and rushed to the stock market, which sent Russia’s two major indexes - MICEX and RTS – upwards. Now market members have left the stock market and started to purchase dollars and euros again, which results in the ruble decline.

Many analysts say that the current negative sentiments on the Russian market are connected with yet another reduction of the oil prices. The pessimism of European markets adds more fuel to the fire.

To crown it all, Russia’s Ministry for Economic Development said that it had revised the decline of Russia’s GDP in 2009: it will make up -2.2 percent against the previously announced -0.2 percent. The industrial setback forecast has been revised too: from -5.7 percent to -7.4 percent.