Russian businessman Mikhail Prokhorov, the owner of Onexim Group, was ranked the nation’s richest dollar billionaire with the fortune of $14.1 billion as of 2008. Prokhorov thus took the place of Oleg Deripaska, whose fortune was evaluated at $40 billion as of the end of 2007, Finans magazine wrote. Deripaska, the head of the Basic Element holding, lost from 16 to 28 billion dollars in 2008 because of the economic crisis. 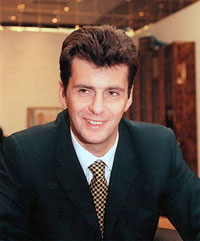 The international financial crisis sent the prices on raw materials plunging. It became virtually impossible for Russian entrepreneurs to receive new loans abroad. The crisis also decreased the capitalization of Russian enterprises, drove many of them into the debt pit and seriously changed the structure of the rating of Russian billionaires.

However, Mikhail Prokhorov can be referred to as one of the few successful businessmen today. He does not have a considerable debt load, whereas the profitability of his business has not suffered a decline, RIA Novosti reports.

Mikhail Prokhorov has become one of the most successful Russian entrepreneurs recently, the magazine wrote. Many of his colleagues desperately try to find any possible way out of the critical situation. Unlike them, Mr. Prokhorov is busy with acquiring the most expensive villa in the world ($496 million in the south of France) and investing millions in the development of biathlon.

The number of dollar billionaires decreased in Russia from 101 to 49 people in 2008. The total fortune of Russia’s ten richest people lost 66 percent in 2008 because of the economic crisis and currently makes up $75.9 billion.

Mikhail Prokhorov’s fortune was evaluated at over $21 billion a year ago, which ranked him the seventh richest Russian.

Chukotka governor Roman Abramovich is ranked second on the list of Finans magazine. His fortune dropped from $23 billion to $13.9 billion. The bronze belongs to Vladimir Lisin, the owner of Novolipetsk Steel, with $7.7 billion (instead of $22.2 billion).

The top ten also includes Lukoil’s Vagit Alekperov ($7.6 billion) and Suleiman Kerimov ($7.5 billion), as well as the co-owner of Alfa-Group Mikhail Fridman ($6.1 billion) and Vladimir Potanin ($5 billion). Some other billionaires dropped out of the top ten list of Russia’s richest men this year, whereas others have lost the title of ‘dollar billionaire’ at all.