Abkhazia, South Ossetia to be recognized by Belarus? 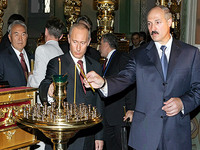 Abkhazia, South Ossetia to be recognized by Belarus?

Valery Ivanov, President of the Parliament of Belarus, declared yesterday that this organism will vote on the recognition of the independence of these two Republics in April. President Lukashenko is in principle in favor.

He declared that the House of the Representatives, the Lower Chamber of Parliament, is discussing the measure and that “in a plenary session the final decision will be taken.” On 26th August 2008, Russia recognized the independence of the States South Ossetia and Abkhazia. Nicaragua, also, has recognized the two States.

Alexander Lukashenko, President of Belarus, declared on Thursday that if his Parliament recognizes the two States, he will sign the document.