Twenty Su-25 Frogfoots on the Way 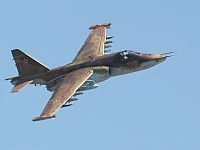 Twenty Su-25 Frogfoots on the Way

"About 10 modernized Su-25 attack aircraft and over 10 MiG-29SMT fighters will be delivered to the Air Force in 2009," Lt. Col. Vladimir Drik said.

In 1999, Russia began to upgrade part of its aging Su-25 fleet. The Air Force received the first 6 modernized Su-25SM planes in December 2006. Russia will keep a modernized version of its Su-25 attack aircraft in service with the Air Force until 2020.

The MiG-29SMT is a recent modification of the MiG-29 multirole frontline fighter. The aircraft features a longer flight range due to the extra capacity of its integral fuel tanks and the installation of an in-flight refueling system (similar to that of the MiG-29SD), among other enhancements.

Deputy Prime Minister Sergei Ivanov, who is in charge of arms procurement, said that Russia's fifth-generation fighter is to be commissioned for the Air Force no later than 2015.