Russian President, Dmitri Medvedev has announced that the President of Cuba, Raúl Castro, will soon visit Moscow. President Medvedev made this announcement during the ceremony of ambassadors' credentials of foreign countries where he accepted the credentials of the new Cuban Ambassador to Russia. He did not say exactly when this visit would take place. 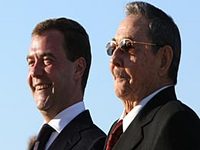 "The friendship put to the test of the time and trust are the foundations of relations between Russia and Cuba... I hope that the coming visit to Russia of the head of the State Council and Council of Ministers of Cuba, Raul Castro, will give a serious boost to our bilateral relations," Medvedev said.

President Medvedev visited Havana in November in a move seen by some western observers as a snub to the United States. Shortly after the visit, a Russian warship sailed into Havana Bay for the first time since the dissolution of the Soviet Union in 1991.

He also said that new projects are developed continuously. "All agreements reached during my visit to Havana have contributed to this achievement" said the Russian President.

Dmitri Medvedev also spoke of his talks with Raúl Castro and the leader of the Cuban Revolution, Fidel Castro, during his visit to Cuba as part of his trip to Latin America (November 2008). Thus, the Russian high dignitary became the fifth international leader received by Fidel Castro, legendary Cuban statesman who ruled between 1959 and 2008.