Russia is developing the new equipment for strategic missiles in response to the USA’s initiative to create the missile shield in space. Colonel-General Nikolai Solovtsov, the Commander of the Strategic Missile Troops, said that the United States was considering an opportunity to set up a missile defense shield in space. 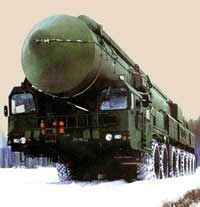 “Judging upon the analysis of the works which the United States currently conducts in the field of development of new weapons, they do consider space as an alternative battlefield. The USA does not refuse from its plans to launch intercepting weapons in space,” the official said.

Russia has been enhancing its strategic missiles since the beginning of the 1990s against the background of a possible strike of US space troops, Solovtsov said.

Russia’s renowned Topol-M missile, for example, was designed to cut the duration and the height of the active part of its flight trajectory, as well as to increase its resistance against the impact of laser weapons owing to the use of special coatings and other features.

Russia plans to use nanotechnologies for the creation of the intercontinental ballistic missiles, which are to be built before 2020. “These are adaptive measures, and they will be taken in the event the USA deploys its missile shield in space,” the general said.

The official added that the USA would not be able to strike a nuclear blow on Russia and have no responding attack afterwards. The US concept of the uncontested nuclear strike stipulates the destruction of Russia’s all attacking missiles. According to the concept, the majority of Russia’s missile systems will be destroyed on their locations as a result of the so-called preventive counter strike of the US strategic offensive arms. If Russia launches its missiles in response, the USA plans to destroy them with the help of its anti-missile systems.

Solovtsov is certain that such a scenario will never be possible for the United States. “Russia’s strategic forces will be able to strike back no matter how the situation may unfold. Russia’s existing and future preventive system is capable of making a timely detection of a massive nuclear blow on Russia’s territory and transmit the adequate information to the state and military command,” the general said.

"After receiving authorization from the Supreme Commander-in-Chief of the Russian Armed Forces it will not take our strategic rocket force more than two-three minutes to carry out the task of launching missiles. This means that the strike group of the force is always ready for a strike of reply," he said.

In case of such a strike "most of the missiles will be fired before the warheads of the adversary strike the deployment areas of missile formations," he said.

"This is guaranteed by the high operative and technical readiness for immediate combat use and also the promptness and stability of the combat command in conditions of resisting the adversary," Interfax quoted the general as saying.

Up to 96 percent of launch facilities of the rocket force are in due readiness for launch on a daily basis, he said. "This guarantees the task of striking key targets constituting the core of the military- economic potential of any aggressor," he said.

"However, we are also prepared for the worst case scenario in a nuclear conflict. Thanks to the mobile component of the strike group with enhanced survivability, the Rocket Force has the necessary potential to carry out missions in case of a so-called deep reply strike when missiles are launched after a nuclear strike of the aggressor," Solovtsov added.

"This is not a groundless statement. It is based on the results of simulating various scenarios of the breakout and development of nuclear missile conflicts," he said.

The grouping of advanced RS-12M2 Topol-M and RS-24 missile systems that are expected to be introduced will be highly effective in penetrating the U.S. layered missile defense system, he said.

"In the final account all these factors will guarantee the fulfillment of the combat tasks of the Strategic Rocket Force in various military-strategic conditions," Solovtsov told Interfax.