Russia gives away some of its islands to China, leaving Japan jealous

Russia and China have finished the demarcation of the border by delivering Tarabarov Island and a part of the Bolshoi Ussuriysky Island to China, Itar-Tass reports. The official ceremony took place on the territories Tuesday. Russia and Chinese border guards have already begun their service on the newly established border. 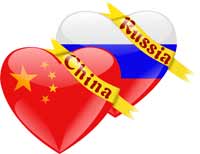 Russia gives away some of its islands to China, leaving Japan jealous

The event marked the final establishment and the statutory recognition of the entire line of the 4,300-kilometer-long border between Russia and China.

According to the intergovernmental agreement, Tarabarov Island will become China’s Yinlong, whereas Bolshoi Ussuriysky will be split into two. Its western part will now belong to China and will be named Heiziazi. The eastern part of the island will remain under Russia’s jurisdiction. The total square of these territories reaches approximately 340 square kilometers.

Russia used to have an army base deployed on Bolshoi Ussuriysky Island. The Russian military left the island after the signing of the border agreement with China. Several posts have been set up to guard the new border.

The new agreement finally ends the territorial dispute between Russia and China. The border issue, which the two countries received as their historical legacy, has now been solved.

The governor of the Khabarovsk region, Viktor Ishayev, put forward a suggestion to establish the Russian-Chinese trade zone on Bolshoi Ussuriysky Island. The regional administration positively estimates the future perspectives for development. “We have not lost anything from the economic point of view,” the governor said.

The border between the Soviet Union and the People's Republic of China had long been an issue of contention. The Sino-Soviet border was a legacy of various treaties between the Qing Dynasty and the Russian Empire, the Treaty of Aigun and the Treaty of Beijing, in which Russia gained over 1 million km² (400,000 mi²) of territory in Manchuria at China's expense, and another 500,000 km² in the western regions from several other treaties. These treaties have long been regarded by Chinese as unequal treaties, and the issue partially arose again with the Sino-Soviet split, with tensions eventually leading to division-scale military clashes along the border in 1969.

Even as tensions lessened and leaders on both sides adopted more conciliatory attitudes, the border issue remained unresolved. Despite the view of the previous border treaties as unequal ones, Chinese leaders were willing to negotiate on the basis of the modern boundaries. That left about 35,000 km² of territory in dispute, with about 28,000 km² in the Pamir Mountains of Tajikistan, 6,000 km² elsewhere along the western border, and about 1,000 km² along the Argun, Amur, and Ussuri rivers on the eastern border. Border negotiations were eventually resumed in 1987 at Mikhail Gorbachev's initiation. An agreement was reached on the eastern portion of the border on May 16, 1991, a few months before the final dissolution of the USSR. Russia inherited most of the former Sino-Soviet border, and ratified the agreement in February 1992, while the other post-Soviet republics negotiated separate border agreements.

The two islands are rich with natural resources. About 70 percent of them can be used in the agricultural industry as arable land, hayfields or pastures. Valuable fur-bearing animals and hoofed mammals inhabit the no-longer disputed territory. Some of the species living there are listed in the Red Books as endangered animals.