Russia will officially announce the establishment of diplomatic relations with South Ossetia and Abkhazia on September 9, the Kommersant newspaper wrote. 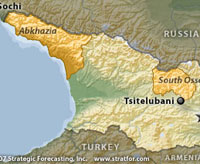 The issue became the major subject of discussion over the weekend, when S. Ossetian leader Eduard Kokoity and his Abkhazian counterpart Sergei Bagapsh visited Moscow for City Day festivities.

An official spokesperson for the Foreign Ministry of Abkhazia said that the official announcement on the matter would be made Tuesday.

“It will happen on Tuesday when Abkhazia and Russia exchange adequate notes. The construction of the embassy will start soon afterwards,” an official from the government of Abkhazia said.

It is worthy of note that many Western leaders expressed their regret in connection with Dmitry Medvedev’s landmark decision. Francesco Cossiga, a 80-year-old former President of Italy is the only politician so far who has expressed an open support of the Kremlin’s decision.

Abkhazia’s Sergei Bagapsh stated earlier that several other countries were also ready to recognize his nation, although the president did not name any of them. According to experts’ estimates, Venezuela, Cuba and probably Turkey may recognize Abkhazia.