The international community collectively held their breath waiting for the reaction of Russia after the savage, brutal, criminal attack by Georgia on South Ossetia. After having offered a cease fire in hostilities, the back stabbing Georgians immediately violated the cease fire, invading South Ossetia and causing massive destruction and death among innocent civilians, among peacekeepers and also destroying a hospital. 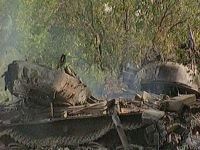 At approximately 11:30 p.m. Moscow time Georgians opened fire with heavy artillery from the side of the Georgian villages of Ergneti and Nikozi against the city of Tskhinval, the Defense Ministry of South Ossetia announced on Thursday. Georgian troops attempted to storm the city much as Hitler‘s Panzer divisions blazed through Europe. Also noteworthy is the fact that Georgian tanks and infantry were being aided by Israeli advisors, a true indicator that this conflict was instigated by outside forces.

Meanwhile, the western corporate media was maintaining a blackout of “the grand silence” on the aggression of Georgia. When they did finally report on it, they were as usual telling the story backwards with headlines such as “Russian Jets Attack Georgia” and “They Have Declared War Against Us” as though Georgia had not done anything wrong.

A large part of the capital of South Ossetia, Tskhinvali, has been destroyed along with five villages. South Ossetia reports that more than 1,600 people have been killed in the past 24 hours. There are also many casualties among peacekeepers and hospitals are said to be overflowing with victims.

Relating what has become common practice among war criminals, Russian Foreign Minister Sergei Lavrov reported: "A Russian humanitarian convoy has come under fire. Panic is growing among the local population, and the number of refugees is increasing. There are reports of ethnic cleansing in some villages... The situation is ripe for a humanitarian catastrophe."

Zarskaya road, which encircles the South Ossetian capital, Tskhinvali, was cleared of Georgian troops as Russian tanks entered the area. So at long last, the soldiers of civilization and peace, the Russian Army, has moved in to push back the invaders. An elite Spetznaz unit has arrived in the South Ossetian capital. They will support Russian peacekeepers who are reported to be coming under artillery fire from Georgian troops. During a meeting with the Minister of Defense, Anatoly Serdyukov, Dmitry Medvedev said Russian peacekeepers will attempt to "force the Georgian side to stop fighting."

NATO, the US and the EU all called for an immediate end to hostilities. The EU will be convening an emergency session to work on plans for a cease fire. Georgia's president told CNN: "Russia is fighting a war with us in our own territory." In a display of cowboy bravado, Georgia also announced that their contingent in Iraq would be withdrawn, ostensibly to be available for further incursions and murderous rampages such as the one of Friday morning. Saakashvili, looking like a pompous clown, called on reservists to sign up for duty, saying: "This is a clear intrusion on another country's territory. We have Russian tanks on our territory, jets on our territory in broad daylight.” This of course is leaving out the part where he first sent his jets to strafe and bomb civilian areas and the Russian response comes as an attempt to prevent further attacks.

Russia and the international community have called on Georgia to pull its troops out of the region. Russian president Dmitry Medvedev says Moscow will take appropriate political and military measures to stop the violence in South Ossetia and he resolutely assures that those responsible will pay for their crimes.

Tshinvali is reported to be short of medicine and water, while most of the city's communication networks have been destroyed. Russian peacekeepers are assisting remaining residents. President Medvedev has ordered humanitarian assistance for the beleaguered region. A mobile hospital will leave Moscow for North Ossetia, a Russian republic bordering South Ossetia, at 22:00 (18:00 GMT). An Il-76 aircraft will deliver medical equipment as well as doctors, psychologists and rescuers totaling 60 personnel.

President Medvedev said, “The Russian military presence in South Ossetia complies with international law and is aimed at enforcing peace. As it has been throughout history, Russia continues to guarantee peace and security in the Caucasus. The action by Georgia contravenes Russia’s mandate for peacekeeping and amounts to blatant aggression. Russian peacekeeping forces and unarmed women, children and elderly have been the victims.”

Russia will continue to take adequate military and political measures for the immediate cessation of violence and to protect civilians including women, children and the elderly, most of whom are citizens of the Russian Federation as it implements a peacekeeping mission in accordance with existing international agreements.

Georgia’s desperate gamble has exploded in their faces. The conflict ``absolutely dooms Georgia's chances for North Atlantic Treaty Organization membership,” said Robert Hunter, US ambassador to the Brussels-based alliance under President Bill Clinton and now a senior adviser at the policy- research group RAND Corp. in Washington. ``You don't bring in a country that has this sort of trouble.''

The only possible and reasonable way out of this situation is the complete withdrawal of Georgian troops to their initial positions and the immediate signing of a legally binding agreement on the non-use of force. Only after this measure has been taken will it be possible to talk about further measures to de-escalate tensions. And so protecting LIFE is the honorable duty of the Russian military. Much as it was during the Great Patriotic War, when the Red Army hoisted the hammer and sickle flag on the Reichstag building, signifying the defeat of fascism.