Kasparov’s associate fought together with Karadzic

The arrest of the leader of Bosnian Serbs, Radovan Karadzic, whom The Hague Tribunal accuses of war crimes and crimes against humanity in Bosnia and Herzegovina, may indirectly undermine the image of the democratic movement of the country. As a consequence, it may also destroy the reputation of one of the leaders of the Russian democratic opposition – former world chess champion Garry Kasparov. 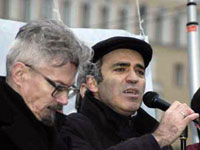 Kasparov’s associate fought together with Karadzic

Kasparov’s close associate of Other Russia and National Assembly coalition, the leader of the now-banned National Bolshevik Party, Eduard Limonov, was a close friend with Karadzic. In addition, Limonov took part in military actions against the Bosnians who defended Sarajevo. The evidence of that can found in Serbian Epics documentary by Pawel Pawlikowski that was spread over the Internet soon after Karadzic’s arrest.

The camera particularly caught a friendly conversation between Eduard Limonov and Radovan Karadzic on positions of the Serbian army. The film also shows Limonov shooting a heavy machine gun in the direction of the besieged city.

The appearance of the controversial documentary has caused quite a commotion in liberal circles. The image of a fighter for democracy, which Limonov currently tries to justify working together with Kasparov, forms a clear contrast to the bloody massacre that took place 13 years ago.

Sarajevo was practically leveled during the siege, which many compared to the siege of Leningrad by Nazi troops. According to different estimates, more than 12,000 residents of the city died during the siege, about 50,000 were wounded. Civilians made up to 85 percent of the victims.

As a result, the International Criminal Tribunal for the former Yugoslavia sentenced the main characters of the Bosnian massacre to life in prison. The episodes of the siege of Sarajevo appear in accusations of Karadzic, whom Limonov met during military actions in the Balkans.

EU leaders have already welcomed the arrest of Karadzic. "This is a very positive development that will contribute to bringing justice and lasting reconciliation in the Western Balkans,” the President of the European Commission, Jose Manuel Barroso said. "It is very important that somebody like Radovan Karadzic will be in front of the (ICTY) having a fair trial,” Javier Solana, EU High Representative for the Common Foreign and Security Policy said.

Limonov, whom the Western press often refers to as one of the leaders of the Russian democratic opposition, does not share the positions of Barroso and Solana. The co-chairman of Other Russia profoundly regrets the capture of Karadzic, who was a “true hero” as he put it.

Russian human rights activists disagree with the leader of National Bolsheviks. “Karadzic has earned enough to be judged by the International Tribunal. The fact that heads of states can be put on trial is a positive aspect, although they are the heads of small countries, whereas the heads of large countries escape punishment,” Lyudmila Alekseyeva, the head of the Moscow Helsinki Watch Group said.

“Limonov has done mischief in his life, including this,” she added commenting on the documentary devoted to Limonov’s meeting with Karadzic.

A well-known Russian human rights activist is certain that Eduard Limonov’s connection with the events in Sarajevo may do much harm to the whole democratic movement in Russia. “Limonov has evolved quite a lot too. One has to conduct a special investigation to see what he was doing at that Serbian war and whether he caused bloodshed,” Aleskeyeva said.

“I believe that the events in Sarajevo were horrendous and bleeding, that is why I think that there is no legal remoteness on crimes against humanity from the point of view of morality,” Alla Gerber, the president of Holocaust foundation said.

“I think that if there is an episode then it must be investigated. Let it be either a serious judicial inquiry or a journalistic investigation at least. I do not think it is possible for me to give any comments on the fact,” she said regarding the spreading of the above-mentioned documentary on the web.