Medvedev or Putin – who is the president?

Western media continue to discuss one and the same question – what kind of a person the new Russian President Dmitry Medvedev is. To be more precise, the West would like to know whether Medvedev acts as the Russian president or Vladimir Putin’s shadow. 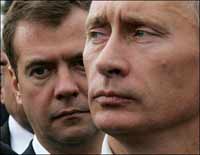 Medvedev or Putin – who is the president?

Britain ’s The Economist decided to analyze the non-standard situation too. The newspaper started with Medvedev’s participation in the recent G8 summit in Japan. According to The Economist, Medvedev was modest and unpretentious there. He was obviously sticking to the Kremlin line of behavior, previously developed by Putin, the newspaper wrote. During his talks with British Prime Minister Gordon Brown Medvedev seemed to be more compliant than Putin could be regarding the matter of closing British Council departments in Moscow, the killing of Alexander Litvinenko in London and the TNK-BP scandal. If Medvedev really had opportunities for making independent decisions, he concealed them well, the British newspaper believes.

Many Western observers believe that Putin still holds the reins of power in his hands. Being the prime minister, Putin controls the basic power levels and the state treasury. Putin is still more popular than Medvedev.

Nevertheless, Medvedev is not just Putin’s shadow. Putin chose him as his potential successor in the long run. Some observers say that the current dual power situation in Russia is a part of the transition period. The question is whether Putin returns to the Kremlin at the end of this period or not.

It is not ruled out that Putin will not use the chance to return as the president of Russia. It is also possible that he will gradually disappear from the public eye and leave Medvedev instead. The Economist wrote that Putin preferred to stay at power to feel safe. That is a very strange supposition to make.

Dmitry Medvedev as the president and Putin as the prime minister have to face serious challenges nowadays. The inflation rate has exceeded the level of 15 percent, whereas food prices continue to grow very fast in Russia. The macroeconomic stability, which Putin was so proud of, can be shattered.

The growing prices have become the biggest problem for common Russians, although they do not exercise their feelings of protest yet. People prefer not to save money, but spend it as quick as they can.

Medvedev has a hard goal to pursue. He tries to conform to expectations and keep the process under control. Being the prime minister, Putin keeps the chance to correct the actions of his political successor.

It is worthy of note that Dmitry Medvedev has become the most frequently mentioned persona in the Russian media, Interfax reports.

The system of complex news analysis determined that Medvedev was mentioned in 596 political, economic and financial news stories and articles made by various Russian media outlets during July 7-13. Putin was mentioned in 396 materials.

Deputies of the Russian State Duma have found an original way out of the situation with the question of whose picture they need to hang in their offices – Medvedev’s or Putin’s. They decided to hang both portraits. Some even prefer pictures of Medvedev and Putin together on one photograph, against the background of the Russian flag.