The first and the last president of the USSR, Mikhail Gorbachev, is deeply concerned about the excessive presence of the defense factor in modern-day politics and thinking. Gorbachev is particularly concerned about the United States, because its foreign and home polices target not only American citizens alone. 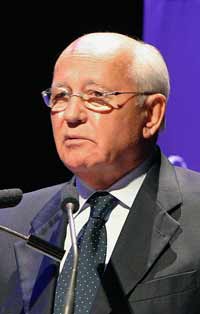 Mikhail Gorbachev believes that the USA needs to fully decline its nuclear weapons to exclude disbalance on the international arena.

“Even USA’s internal problems have stopped being purely internal problems. I am talking about the economy, first and foremost. It is possible to solve the problem of the huge US budget deficit with the help of a conveyor printing green notes nonstop. However, it can be possible just for a while. This mechanism can not work endlessly,” Mikhail Gorbachev wrote in an article published in the Rossiiskaya Gazeta newspaper.

Gorbachev believes that the USA conducts its foreign policy to exaggerate its role in the world, particularly in the field of anti-terrorist struggle and non-proliferation of weapons of mass destruction.

“It was typical for the current administration, especially during George W. Bush’s first presidency, to solve all these problems mainly with the use of military means, threats and pressure. Will US presidential candidates find an alternative approach to these serious problems? This is the most important question today,” Gorbachev believes.

"I am deeply concerned over increasingly visible signs of the militarization of politics and thinking in the modern world. They want to get people accustomed to the fact that almost any problem can be solved in a very simple way – with the use of the military force, even though the military route again and again leads to a dead-end," the former Soviet president wrote.

Mikhail Gorbachev thinks that it is enough to look back at the examples of North Korea and Iran.

“Having spent several years on bellicose rhetoric, the US administration started serious talks with North Korea with the participation of South Korea and other countries of the region. The result followed soon afterwards, albeit not at once: they started to close the North Korean nuclear program. Of course, the Iranian problem has its own specific character. Maybe, it is even more difficult. However, it cannot be solved with threats and phantom hopes for a regime change,” Gorbachev wrote.

Mikhail Gorbachev believes that the world’s superpowers, Russia and the USA, need to reduce their nuclear potentials.

“Let us imagine that the world will get rid of nuclear weapons in 10 or 15 years. What will be left? Piles of conventional weapons, latest types of them, the power of which would be comparable to that of WMDs. A lion’s share of them will be owned by one country, the USA, which will thus obtain the overwhelming predominance in the world,” Gorbachev believes.

“Nowadays the USA makes a half of world’s defense products. The country has over 700 army bases spreading from Europe to most remote corners of the world. Those are only officially recognized bases. It seems that the Cold War has never been a matter of the past. It seems that the USA is surrounded by enemies, against which the country can struggle with the use of tanks, missiles and planes. Only empires used to interpret their security like that,” Gorbachev said.