Emergency cars to be switched to helicopters in Moscow

Moscow authorities are considering the plan of small aircrafts penetration in Moscow. Particularly, there was considered a plan of switching emergency cars to small helicopters. 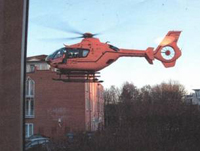 Emergency cars to be switched to helicopters in Moscow

One of the authors of this plan, ecologist Sergey Shvedov, says: ‘There are a lot of traffic jams in Moscow. That’s why emergency cars often don’t have time to take patients to the hospital. The use of small helicopters will solve this problem’.

Not only ecologists, but also doctors took part in the discussion. Among them was famous Russian doctor surgeon Leonid Roshal. The meeting also attended representatives of Emergency Situations Ministry and experts in aviation.

Experts say that all necessary technical conditions for the system of small aircrafts to be realized are obeyed. It’s not going to cost a lot – just about 70 million rubles (3 million dollars) – that’s the cost of helicopters safety monitoring.

The first part of a plan is to develop helicopter roots over the Moskva river and install landing fields. So, small aircrafts will be a safe and quick way to react to emergency situations. But there is a problem: this project requires Major’s Office and the Ministry of Defense approval as air traffic over Moscow is forbidden.