In the near future the US Congress will consider the candidacy of a new US ambassador to Russia. US President George Bush proposed a career diplomat and the current US ambassador to Bulgaria John Beyrle, 54, for this post. 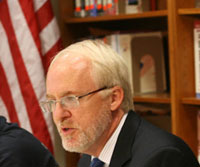 Before his appointment as ambassador to Bulgaria in July of 2005 he worked in the US Embassy in Moscow. In 2003-2005 he was Deputy Chief of Mission in Moscow at the rank of minister-counselor. Before that Beyrle served as the Counselor for Political and Economic Affairs in the US Embassy in Prague .

John Beyrle has been working in the US Department of State since 1983. He served as a staff officer to Secretaries of State George Shultz and James Baker in the Republican administrations of Ronald Reagan and George H. Bush. From 1983 to 1985 he worked in the US Embassy in Moscow, and was later involved in diplomatic missions in Sofia till 1987. In the 1990s Beyrle served as a Special Advisor to the Secretary of State for CIS Affiars.

The would-be US Ambassador to Russia also worked as an advisor on Russia in the Clinton administration. He speaks Russian, Bulgarian, Czech, French and German.

“John Beyrle who nominated by George Bush is a professional diplomat. This fact leads us to believe that there will be no significant changes made in the relations between Russia and the USA in the foreseeable future. Otherwise some more authoritative person would have been recommended for Moscow,” Victor Kremenyuk of Moscow’s Institute of U.S. & Canadian Studies told the Vremya Novostei newspaper. According to him, the new ambassador will have to keep US-Russian relations on the same level, which suggests framework deals struck by Vladimir Putin and George Bush in early April in Sochi : “John Beyrle will have this task up till the presidential election in the USA in November. After that the issue of the US Ambassador to Moscow will be considered by the new administration of the White House.”

The diplomat’s father, Joseph Beyrle, died in December of 2004. He is thought to be the only American soldier to have served in both the United States Army and the Soviet Army in World War II. Landing in France in 1944, Beyrle completed diversionary missions in the German rear area and fell prisoner. In January of 1945 Beyrle escaped from the German-based concentration camp, reached positions of the Soviet Army and then fought in the tank battalion against Nazi Berlin. He was injured in battle and got into a Soviet military hospital in Poland. Marshal Zhukov himself provided necessary documents for Beyrle so that he could come back home to the USA.

In September of 1994 during the solemn ceremony in the White House Beyrle together with other veterans was granted awards from Russian and US presidents - Boris Yeltsin and Bill Clinton.