Russia forces USA out from its traditional arms markets

Russia forces the USA out from the traditional arms market. Russia has won a 4-billion-dollar contract with Saudi Arabia in a competition with the USA and France. This achievement of the Russian defense complex can be explained by both the high quality of the national military hardware defense equipment and the blunders of its Western competitors. However, Russia should not rest on its laurels: the current state of the nation’s defense industry is not good enough. It is not ruled out that the contract with Saudi Arabia may repeat the unfortunate fate of MiG supplies to Algeria. 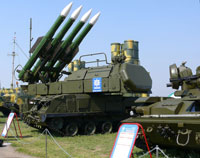 Russia forces USA out from its traditional arms markets

Russia has entered the market area which has traditionally been under the USA’s control. In this case it goes about Saudi Arabia. Rumors of Russia’s intention to sign a multi-billion-dollar contract with the country appeared in November of 2007 when then-President Vladimir Putin met with the Saudi Crown Prince Sultan bin Abdul Aziz Al Saud. On the eve of the meeting Putin toured Arab states, and visited Arab capital Riyadh where none of Russian and Soviet leaders had been before.

The West considered it a newspaper hoax, because Saudi Arabia was totally dependant on arms supplies from the West – presumably from the USA. More importantly, the country has not voiced a desire to change the supplier. However, Russia and Saudi Arabia preferred not to reveal details of their talks on the contract, which continued for about six months.

Now it is known that the contract is evaluated at four billion dollars. The Saudi king got interested in the wide range of Russia’s defense equipment: from aircraft and armored vehicles and missile complexes. It became known that a half of the contract accounts for 100 Mil helicopters (mainly, Mi-17 and Mi-35). Half a billion dollars accounts for 150 T-90C tanks. The contract also includes 20 middle-haul air defense systems Buk-M2E and several hundreds of BMP-3 infantry combat vehicles.

Why did Riyadh prefer Russia to the USA in terms of the military hardware? Saudi Arabia has been under strong influence of the USA and the UK for decades. It was caused by the struggle between the USSR and the West for influence areas, including the Middle East. Saudi kings saw a threat to their power from the USSR that tried to develop socialist regimes in Arab states. The state of affairs is different now. The Soviet Union broke up, which gave Saudi Arabia an opportunity to negotiate and cooperate with Russia.

It is worthy of note that Russian weapons have been attractive to foreign buyers from the point of view of price and quality combination. Russia used to make arms shipments to other Gulf States such as the United Arab Emirates and Kuwait before. Experts say that Russian military vehicles showed better technical qualities than their Western analogues, which made Saudi Arabia evince great interest in Russian products.

However, the better quality of Russia’s defense equipment in comparison with US analogues was demonstrated during the 1991 Operation Desert Storm. At that time most countries, including those possessing Soviet arms, joined the anti-Iraqi coalition. Syrian T-72 tanks successfully covered longer distances than USA Abrams tanks that broke down because of overheating and sand. That is only one of such episodes.

It is clear that such incidents did not make US arms more authoritative. In addition, last year the US Senate deprecated the deal with Saudi Arabia, according to which it was to obtain a set of high-precision bombs. The US administration believed that the bombs could fall into terrorists’ hands. Thus, Riyadh tried to find another supplier. They arranged the supply of helicopters and tanks with the French, but France demanded to extend the contract and to include Navy ships in it. However, Saudi Arabia did not like such impudence and apparently decided to punish France by signing a contract with Russia.

The contract evidences Russia’s success, but now the USA has nothing to worry about. Russia’s deal with Saudi Arabia is just a pinprick to them. For the time being, the Russian defense industry is a goose that lays golden eggs, but they are of poor quality. Russia should not forget that Saudi Arabia will not stand such treatment and in case of malfunction it will come back to the USA.

It is important for Russia at this juncture to save the reputation of a credible supplier. Urgent measures are necessary to improve the state of the Russian defense industry. In fact, it is the only branch of Russia’s industry that produces competitive goods on the world market. Young people do not want to engage in the defense industry because of low salaries.