Every minute in each day of a head of state is strictly scheduled. As a rule, a newly elected president has to face the sleep deprivation factor, when he can afford only six hours of sleep a day. Nevertheless, Russia’s President Elect, Dmitry Medvedev, finds free time for his family, sports and for his hobbies. The Komsomolskaya Pravda newspaper found out how Mr. Medvedev schedules his day and how he prefers to spend precious minutes of free time. 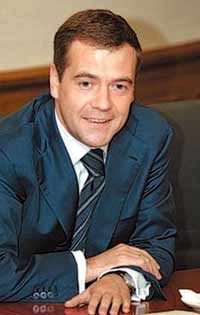 Dmitry Medvedev usually wakes up at 8 a.m. He goes to bed at 2. a.m. Every morning and evening Mr. Medvedev spends an hour swimming in a pool and does morning exercises. In general, he spends 2.5 hours every day on physical training. Medvedev used to do a lot of yoga: five or six times a week. When a young man, he used to go in for rowing.

Russia ’s President Elect prefers to spend his summer vacation in Russia. He has already traveled all over the country with his family. When the presidential election in Russian ended, Dmitry Medvedev went to Sochi (a resort city on the Black Sea coast of Russia).

Mr. Medvedev has not been driving a car for many years. Instead, he prefers to ride a snowmobile or a quad bike.

Mr. Medvedev has a son – a 12-year-old boy named Ilya. Medvedev is certain that parents should communicate with their children respectfully and on equal terms. That is why he hardly ever punishes his son .

When it comes to food, Mr. Medvedev prefers high quality healthy meals. He currently prefers fish dishes including Japanese sushi. He is not indifferent to desserts: Mr. Medvedev has a great passion for ice cream and candy.

Russia ’s President Elect does not drink alcohol. He can have a glass of red or white wine on special occasions, although he usually drinks juices and green tea.

Mr. Medvedev is not a big fan of modern literature. The last book which he read was Haruki Murakami’s “A Wild Sheep Chase.” Medvedev likes great Russian writers, such as Anton Chekhov and Fyodor Dostoyevsky.

Mr. Medvedev logs on the Internet every morning to check all leading news websites.

As for the taste in music, Mr. Medvedev is a conservative. He loves Deep Purple, Black Sabbath and Led Zeppelin. The President Elect has a big collection of records at home, including rare recordings on vinyl disks. Sometimes he likes to listen to jazz and classical music.

Dmitry Medvedev is not a big fan of movies. He rarely goes to the cinema and prefers to watch Russian and European serious films at home, although he likes watching Hollywood comedies at times.

Mr. Medvedev goes in for football and hockey. He likes watching games on TV and tries to attend all matches with the participation of Russian national teams.