Vladimir Putin rejected the rumours about his alleged divorce and a wedding with rhythmical gymnast Alina Kabaeva. Putin released the statement during a press conference with Silvio Berlusconi, which took place Friday in the residence of the would-be Italian Prime Minister in Sardinia. 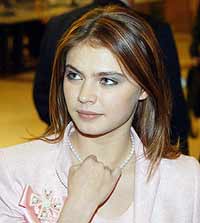 A correspondent of the Nezavisimaya Gazeta newspaper asked a question about Putin’s alleged wedding with Alina Kabaeva.

“The first thing that I want to say. There is not even a word of truth in what you said,” Putin responded. At the same time, the outgoing Russian president acknowledged that he liked such a successful and beautiful girl as Alina Kabaeva.

Putin pointed out that every human being, even public or famous figures, have their own private lives, which must not be interfered in, despite the public interest.

Putin arrived in Italy to have a meeting with Silvio Berlusconi after his visit to Libya.

The rumour about Putin’s divorce and his wedding with Olympic champion and State Duma deputy Alina Kabaeva was started by an article published in the Moskovsky Correspondent newspaper, which belongs to oligarch Alexander Lebedev. The article in the newspaper wrote that a tender for the organization of Putin’s wedding had been announced among Moscow-based event-organizing companies.

The controversial article in the Moskovsky Correspondent may lead to lamentable consequences for the newspaper.

Alina Kabaeva’s publicist, Elizaveta Ovchinnikova, demanded the newspaper should officially and publicly reject the information. She refused to send an official notice to the newspaper and offered reporters to write the statement themselves. Otherwise, Ovchinnikova added, Kabaeva would sue the newspaper.

The newspaper does not intend to publish the disclaimer. Its editors believe that a rumor, which can not be referred to as a fact, can be rejected only if there is no evidence to prove that the rumour is untrue.