Vladimir Putin’s dog, Labrador named as Conni, participated at top level official meetings and made numerous TV appearances. The newly-elected Russian President, Dmitry Medvedev, also owns a pet, although it is a cat. 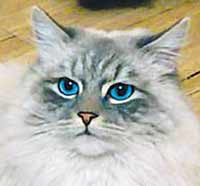 The cat, named as Dorofei (Dorotheus), is four years old. The blue-eyed cat has an experience of “political” struggle. Dorofei once had a fight with a cat owned by Mikhail Gorbachev, the former Soviet leader, who used to live next to Dmitry Medvedev. Dorofei did not win the fight with Gorbachev’s cat. The Medvedevs had to treat their cat with antibiotics for a month. Afterwards, they decided to castrate the cat to protect him from possible unpleasant situations in the future.

Doforei formally belongs to Dmitry Medvedev’s wife, Svetlana. She chose the cat in a cat-breeding farm. “I remember that there was a spark between Svetlana and the cat immediately after they saw each other. Doforei started to display his affection to Svetlana and fell asleep on her lap while we were talking. She didn’t even think about other options afterwards,” cat breeder Irina Ilminskaya said.

Socks, the cat of the former president Bill Clinton is probably the most famous feline in the USA.

Socks was adopted by the Clintons in 1991 after he jumped into the arms of Chelsea Clinton while she was leaving the house of her piano teacher in Little Rock, Arkansas, where he was playing with his sibling, 'Midnight'. Midnight was later adopted by someone else. After Bill Clinton became President, Socks moved with the family from the governor's mansion to the White House and became the principal pet of the First Family in Clinton's first term, though he was known to share his food and water with a stray tabby, dubbed "Slippers". He was often taken to schools, hospitals, and nursing homes to take part in goodwill visits. During the Clinton administration, children visiting the White House website would be guided by a cartoon version of Socks.

He eventually lost the position of principal Clinton pet in 1997 when the Clintons acquired Buddy, a Labrador Retriever. At this point some fans of Socks joked that Socks had been "voted out of office" of White House pet in favor of the more traditional dog.

Socks found Buddy's intrusion intolerable; according to Hillary Rodham Clinton, Socks "despised Buddy from first sight, instantly and forever." Bill Clinton said, "I did better with ... the Palestinians and the Israelis than I've done with Socks and Buddy." When the Clintons left the White House in 2001 they took Buddy to their new home, but left Socks under the care of Bill Clinton's secretary, Betty Currie. Socks was only the fourth cat to occupy the White House since Franklin Roosevelt's presidency.

In October 2004 Socks made a now-rare public appearance when Currie was guest speaker at an Officers' Spouses Club luncheon at Andrews Air Force Base. Socks accompanied her and took part in a photo op. In mid-2006 Socks was in good health and still living with Currie and her husband in Hollywood, Maryland, about 80 miles from Washington.