Algeria wants to return 15 fighter jets it bought from Russia because of their poor quality, the Kommersant daily reported on Monday, citing an official from Russia's state United Aerospace Corporation. 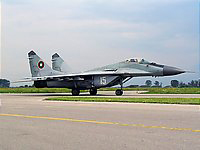 The official said Russia was proposing to take back the MiG-29 jets, which were delivered to Algeria in 2006 and 2007, but only if Algeria bought more modern and expensive planes such as the MiG-29M2 or the MiG-35.

In return for Russia agreeing to cancel Algeria's Soviet-era debts, Algerian authorities bought Russian arms worth 6.3 billion dollars, including 3.5 billion dollars in fighter jets, during a visit by Putin to Algeria in 2006.

Rosoboronexport signed a $1.28 billion contract for the delivery of 29 one-seat MiG-29SMT Fulcrum fighters and six two-seat MiG-29UB fighters in March 2006 as part of an $8 billion military-technical cooperation agreement with Algeria.

In October 2007, Algeria stopped payments on other military contracts pending the return of the MiGs.

The Mikoyan MiG-29 is a 4th generation jet fighter aircraft designed for the air superiority role in the Soviet Union. Developed in the 1970s by the Mikoyan design bureau, it entered service in 1983 and remains in use by the Russian Air Force as well as in many other nations. NATO's reporting name for the MiG-29 is "Fulcrum", which was unofficially used by Soviet pilots in service. It was developed to counter new American fighters such as the F-16 Fighting Falcon, and the F/A-18 Hornet.

Experts suggest Algeria may have opted instead for French Rafale fighters as France builds up its presence in the North African state, RIA-Novosti reports.

The Dassault Rafale is a French twin-engined delta-wing highly agile multi-role fighter aircraft designed and built by Dassault Aviation. The Rafale is being produced both for land-based use with the French Air Force and for carrier-based naval operations with the French Navy. It has also been marketed for export. While several countries have expressed interest in the Rafale, there have been no foreign sales as of yet.