The Organization for Security Cooperation in Europe refused to monitor presidential elections in Russia which are set to take place on March 2. The letter sent to Russia’s parliament (the State Duma) said that the organization had been forced to decline Moscow’s invitation to observe the elections of the Russian president. 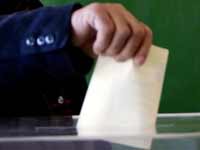 "We made every effort in good faith to deploy our mission, even under the conditions imposed by the Russian authorities," Christian Strohal, director of the Office for Democratic Institutions and Human Rights, said in a statement.

"We have a responsibility to all 56 participating states to fulfill our mandate, and the Russian Federation has created limitations that are not conducive to undertaking election observation in accordance with it."

A source from Russia’s Foreign Affairs Ministry said that Moscow was disappointed and surprised with OSCE’s decision not to monitor the forthcoming elections in Russia.

Russia did not accept a planning mission of ODIHR to determine the framework of a potential observing mission.

"While Russia eventually invited ODIHR on Jan. 28, it set severe restrictions on the composition and duration of the mission, also contrary to previous Russian elections observed," the statement said.

Russia’s requirements have already prevented ODIHR from observing many relevant components of the election process, which is more than what happens on the voting day. The organization particularly failed to observe the registration of presidential candidates, the work of the media and other aspects of the campaign, the AP reports.

In response to the restrictions, ODIHR said it outlined to Russia the minimum required for effective, though limited, observation. In its response Wednesday, Russia's Central Election Commission said it could not meet the demands and denied visas for members of the advance team, the ODIHR said in its statement.

In a separate statement, the OSCE's parliamentary assembly said it had notified the chairman of the Russian State Duma, Boris Gryzlov, that it was unable to accept an invitation to monitor the elections on March 2.

"We regret that circumstances prevent us from observing this election," the assembly's secretary general, R. Spencer Oliver, said in a statement.

While the Denmark-based parliamentary assembly did not monitor the previous Russian presidential election in 2004, it did send observers to Russia for the country's parliamentary poll in December. ODIHR also decided against sending a mission in December, saying Moscow had not issued visas in time.