Russia launched three navigation space satellites GLONASS-M into space on December 25. The satellites have successfully entered Earth’s orbit at the height of 19,140 kilometers above the planet. 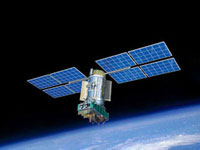 GLONASS-M satellites have been built to replace GLONASS spacecraft in the structure of Russia’s global navigation satellite system. The new generation of satellites will be able to perform their functions for seven years.

The GLONASS orbital group will count 24 satellites by 2010. Russia’s space navigation system is an alternative and competition to USA’s Global Positioning System (GPS) and the planned Galileo system of the European Union.

Development on the GLONASS began in 1976, with a goal of global coverage by 1991. Beginning on 12 October 1982, numerous rocket launches added satellites to the system until the constellation was completed in 1995. Following completion, the system rapidly fell into disrepair with the collapse of the Russian economy. Beginning in 2001, Russia committed to restoring the system, and in recent years has diversified, introducing the Indian government as a partner, and accelerated the program with a goal of restoring global coverage by 2009.

GLONASS was developed to provide real-time position and velocity determination, initially for use by the Soviet military in navigating and ballistic missile targeting. It was the Soviet's second generation satellite navigation system, improving on their Cicada system which required one to two hours of signal processing to calculate a location with high accuracy. In contrast, once a GLONASS receiver is tracking the satellite signals a position fix is available instantly. It's stated that at peak efficiency system's standard positioning and timing service provide horizontal positioning accuracy within 57-70 meters, vertical positioning within 70 meters, velocity vector measuring within 15 cm/s, and time transfer within 1 µs (all within 99.7% probability).

A fully operational GLONASS constellation consists of 24 satellites, with 21 used for transmitting signals and three for on-orbit spares, deployed in three orbital planes. The three orbital planes' ascending nodes are separated by 120° with each plane containing eight equally spaced satellites. The orbits are roughly circular, with an inclination of about 64.8°, and orbit the Earth at an altitude of 19,100 km, which yields an orbital period of approximately 11 hours, 15 minutes. The planes themselves have a latitude displacement of 15°, which results in the satellites crossing the equator one at a time, instead of three at once. The overall arrangement is such that, if the constellation is fully populated, a minimum of five satellites are in view from any given point at any given time.

Each satellite is identified by a "slot" number, which defines the corresponding orbital plane and the location within the plane; numbers 1-8 are in plane one, 9-16 are in plane two, and 17-24 are in plane three.