Dmitry Medvedev: 'Russia will no longer tolerate being patronized or ignored by the West'

Dmitry Medvedev has already earned the reputation of Russia’s next president. With Putin’s support behind him, Medvedev, currently a first deputy prime minister, has all chances to win the election on March 2. 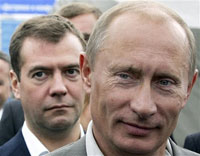 Dmitry Medvedev: 'Russia will no longer tolerate being patronized or ignored by the West'

On Tuesday, Medvedev returned the favour and begged Putin to accept the post of prime minister. Putin, who always seems to be testing the political waters, has pointedly not yet accepted.

The final piece of Russia's political jigsaw puzzle - acceptance of the offer - seems likely to fall into place in the next few days.

There has also been talk, among analysts and insiders, that Putin's successor would resign within a few months of the presidential election, enabling Putin to run again.

Any independent new president might find it difficult to replace Putin. He enjoys the support of over 80 percent of population; no other politician in Russia comes close to matching this popularity.

Putin has filled key positions in the Kremlin with fellow veterans of the KGB or other Russian security services, whom analysts say rely on Putin to divide up power and settle disputes.

Medvedev, meanwhile, is a political outsider. He has spent most of his working life as Putin's aide, has never run for office and has no power base aside from Putin's patronage.

In his televised speech proposing Putin as prime minister, Medvedev suggested that he does not think he could run Russia as effectively as his mentor has.

Meanwhile, U.S. President Bush said he would have no desire to follow Putin’s path of to retain power after his term as president ends, the AP reports.

Speaking with reporters Friday, Bush said he had no direct knowledge of the events in Moscow, where Putin's constitutionally final second term as Russia's president ends next year.

"We just better let the elections play out and see what happens," Bush said when asked.

"Just let me say this: It is not something I would want to do," he said in an interview with ABC News. "I want to serve my time as president of the country and move on and let somebody else take the helm, and that is exactly what is going to happen here."

Other conditions exist that would help Bush's decision not to try to stay and Putin's to hold on to power: Putin's popularity is about 80 percent, Bush's in the mid-30s.

Friday was not the first time Bush dismissed a post-second-term role for himself. Shortly before the 2004 elections that gave him his second term, Bush hosted friends, supporters and bankrollers at a private lunch in Washington.

"I'm going to come out strong after my swearing in," Bush said, according to The New York Times Magazine. His victory and a Republican sweep in Congress would give him "two years, at least, until the next midterm. We have to move quickly, because after that I'll be quacking like a duck."

In American politics, a politician serving in his last term is called a "lame duck."