Russian President Vladimir Putin has commented on the parliamentary election results. As expected, he began to distance himself from United Russia party. His primary goal now is to retrieve his role of the national leader. 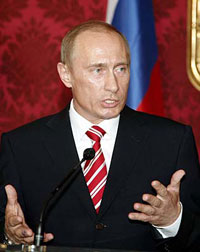 For a start Putin demonstratively refused to visit United Russia headquarters soon after elections. Putin has even more bad news for his party: he excluded a possibility of forming one-party government. United Russia still remains just a part of the parliament.

Why did Putin decide to chair the election list of United Russia? There can be different versions found to explain his decision. Some think that it was done to retain control over the constitutional majority in the Duma, at the cost of the national leader status. Others think that Putin needs some additional trust mandate to solve problems with his future employment.

Putin’s participation in elections could give him a moral right to exert influence on politics. Right now it is not important which version is correct, although the first variant seems to be more true to life. Putin solved his own political problems to control retention over the parliament and to his political influence. That is why he did not use his chance to congratulate United Russia on the victory. Moreover, it would have been harmful to his future political goals.

Putin now needs to draw a clear distinction between him and the party. As a party chief, Putin relieved himself of responsibility as soon as it became possible. At first he thanked all Russians for their high political activity. When speaking about United Russia, Putin modestly admitted that they had won solely due to his participation in the election. “I hope that United Russia would never let you down,” Putin said as a part after the voting.

To add more fuel to the fire, Putin did congratulated United Russia’s election rivals too and pointed out their good results. “The Communist Party of Russia and The Liberal and Democratic Party strengthened their positions in the Duma. Fair Russia was a great success at this election and entered the Duma at once,” Putin said.

Pro-Putin youth parties just wasted their time: the opposition was not going to topple anyone. As it was expected, United Russia will be a political party in the parliament, whereas Putin will try to recover as the a national leader. Like he promised, the election has not given any answer to the question of his successor.