Dehumanization and Demonization: The War Has Begun AGAIN!

Since the Great Patriotic War, the world has seen a parade of individuals and nations who have been subject to the inane and sordid process utilized by the empire’s propaganda war machine of dehumanization and demonization: Sadaam Hussein, Manuel Noriega, Slobodan Milosevic and now Mahmoud Ahmadinejad. 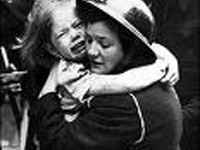 Dehumanization and Demonization: The War Has Begun AGAIN!

Of course, these tactics were utilized prior to the war, but this writing is basically addressing more recent events. Dehumanization and demonization employ the use of distorted images (e.g. Hitler) and loaded words…words that have extremely strong negative meanings.

Stereotyping, chauvinism, scapegoating, prejudice and even violence are employed against those who are objects of dehumanization and demonization campaigns as they are transformed into easy and suitable targets. This serves to greatly promote the profit-making goals of the corporate elitists in their plunder and exploitation of these “inferior“ people who need to be “taught“ the proper way of life.

The demonization of Islam and Arabs is a current example of this process. Muslims and Arabs are now caricatures, symbols of fanaticism, evil and cruelty. Islamofascism is the newest buzz word for the empire‘s propaganda war machine. The word equates Islamic movements with European fascist movements of the early twentieth century.

This generalized association of the religion of Islam with fascism is hateful and inaccurate.

The demonization of Iranian President Ahmadinejad at Columbia University recently is another step in preparing for yet a another war of aggression. If Ahmadinejad can function in the American psyche as a fanatical despot, and he and his country can be inflated into huge threats and sources of fear and suspicion, then these threats, fears and suspicions can be used to justify the enormous cost of continuing to maintain American occupation forces in the Middle East and even to make war against another country in "self-defense."

The president of Columbia University, Lee Bollinger, disgraced himself and his countrymen by hurling abuse and insults when he introduced his guest speaker, President Ahmadinejad. Bollinger called Dr. Ahmadinejad's denial of the Holocaust "brazenly provocative or astonishingly uneducated." His remarks were all the more revolting given the fact that the Iranian leader was seated close by where he was listening as an interpreter translated Mr. Bollinger’s loaded and reprehensible words. "Mr. President, you exhibit all the signs of a petty and cruel dictator."

President Ahmadinejad is not a dictator. He is a lawfully elected president whose power is limited by the constraints of a legislature. Real power rests with Senior Cleric Ayatollah Ali Khamenei who basically controls foreign policy and is commander-in-chief of Iran's armed forces.

Two channels being utilized to attack and demonize Iran and Ahmadinejad are the use of nuclear energy and a quotation that was deliberately distorted for the sole purpose of demonizing the Iranian President. Iran has no nuclear weapons. Its military is designed for defense without any substantial offensive capability. Iran has said it has no desire to attack any other country.

It has also affirmed its nuclear program is for peaceful purposes and that it has no desire for a nuclear weapon. Israel, on the other hand, has more than 200 nuclear weapons and an aggressive, violent air force. On August 9, 2005, at the meeting of the International Atomic Energy Agency (IAEA) in Vienna, Iran’s supreme leader, Ayatollah Khamenei, issued a fatwa (holy order) which forbade the stockpiling, production and use of nuclear weapons. This is never mentioned by any media outlets, while accusations concerning nuclear weapons programs are constantly being disseminated by the corporate elitist media. The IAEA reports that Iran is in compliance with its agreements.

Speaking of Iran's nuclear program, Angela Merkel of Germany has compared Iranian President Mahmoud Ahmadinejad to Adolf Hitler. After repeating the absurdly distorted quotation that President Ahmadinejad threatened to wipe Israel off the map, Mrs. Merkel declared, "Iran has blatantly crossed the red line. I say it as a German chancellor. A president who questions Israel's right to exist, a president who denies the Holocaust, cannot expect to receive any tolerance from Germany." David Horowitz, a Columbia alumnus, called the invitation to Iranian President Mahmoud Ahmadinejad to speak at the campus a “disgrace,” and went as far as stating “Why are they inviting the Persian Hitler to Columbia?” This is demonization at its very worst.

To further demolish allegations of the belligerent nature of Iran’s policies, the following proves to be extremely interesting:

In 2003, in a secret memo to the U.S. government, Iran offered to make peace with Israel, oppose attacks by Palestinian groups on Israel within its 1967 borders, and pressureHezbollah to become a peaceful political party. The Bush Administration refused to respond and continues to assert publicly that Iran wants to destroy Israel and sponsor terrorist groups. The offer, which likely still stands, directly contradicts those statements. Below is some press with more details. The episode calls into question the Administration’s truthfulness and motives with regard to Iran…

Iran’s position is clear and Iran on principle believes in a world free of nuclear weapons. Iran is hopeful that negotiations on North Korea’s nuclear activities can go ahead in the interest of both North Korea and the international community.

Setting aside the blathering demonization even further, what exactly did President Ahmadinejad say? Did he actually say he wants to wipe Israel off of the map? The answer is an unqualified NO! One word might be quite familiar to most people: rezhim-e. It is the word "regime" pronounced just like the English word with an extra "eh" sound at the end. Ahmadinejad did not refer to Israel the country or say anything about any map.
"The Imam said this regime occupying Jerusalem must vanish from the page of time".
Word by word translation:
Imam (Khomeini) ghoft (said) een (this) rezhim-e (regime) ishghalgar-e (occupying) qods (Jerusalem) bayad (must) az safheh-ye ruzgar (from page of time) mahv shavad (vanish from).

Mahmoud Ahmadinejad has repeatedly made attempts to show his human face to those who would be his enemies. In addition to countless personal interviews, he has written long and heartfelt letters to President George Bush and the American people, but few have read or heard his words. Why is that? Interviewers have treated President Ahmadinejad with offensively blatant rudeness and disrespect even though he always manages to maintain his dignity and composure.

Iran cannot be blamed for the defeat and failure of the empire to subdue Iraq. That act of aggression was doomed to failure from the outset and no amount of scapegoating others will change that fact. Inhuman perverse sanctions and naked brute force against Iran and its people should be rejected by all freedom loving people. It is time for truth, dialogue, diplomacy and genuine understanding to prevail before the dogs of war are unleashed on a great cultured and civilized nation and people.