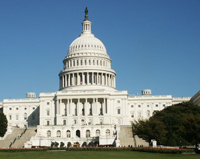 How noble and ethical this Congress must be!! After all, no government official would ever lie about war, or the reasons for starting one.

Just look at all the weapons of mass destruction (WMDs) that were found after George W. Bush (who used his family’s wealth and influence to avoid combat service in Vietnam) and Dick Cheney (who received five separate deferments to also avoid serving in Vietnam) launched their illegal invasion of Iraq.

Oops! They didn’t find any.

Still there was that nasty link between Saddam Hussein and the horrific events of 9/11.

Oops! There wasn’t any link.

Well, at least America is bringing “democracy” to the Middle East.

Nevertheless there is good news on the horizon. George W. Bush and his Afghan puppet Hamid Karzai recently boasted about the progress that has been made during the “intervention” in Afghanistan.

Oops! A United Nations report has described “the security situation in Afghanistan . . . as having deteriorated at a constant rate through 2007.”

Fortunately, American history has shown that using lies to start or escalate wars is an aberration.

Oops! Former president Lyndon Johnson lied about the Gulf of Tonkin incident to escalate the war against Vietnam.

Still Americans were told the truth about the situation in Vietnam after the escalation occurred.

Oops! According to reports, General William Westmoreland, who commanded military operations in Vietnam from 1964 to 1968, underestimated the strength of the enemy in order to maintain domestic support for the war.

Yet, while liars frequently thrive and proliferate in American society, those who speak the truth are often pilloried, and in some cases forced to apologize for their honesty. Thus the lies find the sunlight, while the truth remains mired in darkness.

This is why it was refreshing to discover that MoveOn.org chose to stand by its Petraeus ad. And who knows? Perhaps a few years down the road the myopic hypocrites in Congress, who can assess nothing except in terms of political gain, may be the ones condemned for failing to see the truth.

Meanwhile Americans should remember the lesson taught by Limbaugh, Hasselbeck, Bush, Cheney and others of their ilk: That cowards can “bravely” wage war when their own lives aren’t at risk. Such “bravery” is also why the “Support the Troops” mantra chanted by so many warmongering cowards actually translates into “Exploit the Troops.”

Perhaps the most recognizable passage in the New Testament is THE LORD’S PRAYER. Yet many so-called Christians forget or ignore the message that led to Christ’s recitation of this prayer: Those who conspicuously trumpet their “good deeds” and “righteousness” for the world to see are neither good nor righteous. They are simply hypocrites seeking mortal praise for their self-serving deeds.

Ask yourself this question: How often have warmongering politicians, pundits or celebrities gone to Iraq under the guise of “supporting” or “entertaining” the troops, only to exploit their visits after returning home? “Buy my CD because I sing about the troops; Buy my DVD and watch me entertain the troops; Tune to my television show because this week I’m posing for pictures with the troops; Vote for me because I’ve shown my ‘patriotism’ by visiting the troops.”

So until Rush Limbaugh stops denouncing “phony soldiers” and displays the gallantry to become a soldier himself, until the only “view” people have of Elisabeth Hasselbeck is in military fatigues as she begins combat duty, until Toby Keith actually serves his country in the armed forces instead of enriching himself singing about “American Soldiers,” until “Kid Rock” proves his “bravery” on the battlefield instead of sucker punching Tommy Lee at an awards show, until George W. Bush has the intrepidness to say “bring it on” to an enemy standing a few feet away, and until Dick Cheney stops killing defenseless animals in caged hunts and faces an enemy who can shoot back, the true “phony soldiers” will be those who demand risks and sacrifices from others they’ve never had the courage to make themselves.

Warmongering cowards are the most unpatriotic of all Americans, and if the nation had only their kind to depend upon in times of crisis, the United States would still be a colony of England. Yet sadly, as long as these cowards and hypocrites are given the power to wage war, the platform to exploit it, and the ability to silence voices of peace, truth and justice, war will continue to exist.