The Empire is Zapping “Free Speech”

Andrew Meyer, a University of Florida (Gainesville) senior telecommunications major, was brutally restrained and tasered by police after trying to question presidential candidate John Kerry about why he didn't contest the 2004 presidential election, why there had been no moves to impeach President Bush and whether he and Bush were members of the secret society Skull and Bones at Yale University. The 21-year old Meyer is a student in the College of Journalism and Communications at the University of Florida. 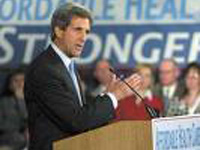 The Empire is Zapping “Free Speech”

Toward the conclusion of Kerry’s town hall forum, Meyer approached a microphone and demanded Kerry answer his questions. He was waving Greg Palast's book Armed Madhouse. "He says you won the 2004 Election, isn't that amazing?"

However, Meyer's microphone was turned off and he refused to stop demanding an answer from Kerry. Kerry is heard admitting that he has the book and has read it. He also was heard saying, "That's all right, let me answer his question" as he urged the audience to remain calm.

Officers grabbed Meyer and he is seen struggling for several seconds as they tried to remove him from the auditorium. He screamed for help and tried to break free with his arms thrashing, and then was forced to the ground by six officers and ordered to stop resisting or he would be tasered. Meyer screamed out, "What have I done? What I have I done? Get away from me. Get off of me! What did I do? Help me! Help." Meyer pleaded with the officers to release him and cried out, "Don't tase me, bro," just before he was shocked with a taser which prompted him to writhe in pain on the floor of the auditorium. He was then led from the room, pleading, "What did I do?"

As police ushered Meyer from the auditorium into the lobby, Kerry explained that he did not think there was sufficient evidence of voter suppression to justify contesting the 2004 election. "We just couldn't do it in good conscience because we didn't have that evidence," he said. Senator Kerry also said he regretted that the discussion was interrupted. "Whatever happened, the police had a reason, had made their decision that there was something they needed to do.

Then it's a law enforcement issue, not mine.”

Meyer, from the Fort Lauderdale, Florida suburb of Weston, has a website featuring home made videos. On the site, Meyer criticizes the Iraq war, the media and the American public for paying too much attention to celebrities. Friends of Meyer have also placed a message about the incident on the website.

Meyer was charged with resisting an officer and disturbing the peace and placed in the Alachua County jail. An investigation into whether officers used inappropriate force will be made due to the fact that utilizing a taser is only justified in cases where there is a direct threat of physical harm to officers. Clearly this was not the case as Meyer had already been manhandled down to the ground. The State Attorney's Office has yet to make a decision about what actual formal charges will be made. Meyer had no comment after he was released on his own recognizance after spending the night in jail.

This unwarranted suppression of free speech and persecution of citizens by the empire is not going unnoticed among freedom loving people worldwide. Meyer did not threaten or harm anyone. The future looks bleak as brutality and “zapping free speech” continue to destroy the last remnants of freedom and "democracy" within the empire.