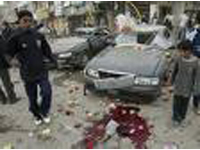 “We’re kicking ass in Iraq” was the reported statement by President Bush during his visit to Australia. Whether or not he said it, this is the message the controlled press have instilled in the hearts and minds of the population in the USA and in the handful of sycophantic nations which supported this outrageous and illegal act of butchery.

For the controlled press, Iraq was a country living in chaos, ruled by a bloodthirsty dictator, who murdered at whim and ran a terrorist network allied to Al Qaeda, which posed an “immediate threat” to the USA and its allies through its “WMD”.

Nothing was said about the US-led sanctions, which between 1990 and 2003 caused starvation and disease, victimising a substantial proportion of the population (mostly children), nothing was said of the heroic efforts of the Iraqi government to try to guarantee access to drinking water, education, free and excellent healthcare (a reference in the modern world), the highest proportion of dentists per capita, among other remarkable achievements in the most progressive state in the Middle East. Nothing was said of the hatred between Al Qaeda and Saddam Hussein.

Nothing is now said about the effects of these 13 years of cruelty, complete with acts of terrorism by NATO forces, and the result of the criminal act of mass murder launched by the Bush regime in March 2003, which transformed a once modern, forward-looking, secular and industrialising nation into a backward, medieval state ruled by political islamists. Nothing is said of women’s rights in the Iraq of today, where girls can be raped or decapitated in daylight because they dare to venture out without a veil.

If “kicking ass” is creating a scenario whereby billions and billions of dollars (and Congress is today being presented with requests for more) of the US citizens’ hard-earned wages are poured into a black hole of corruption (the Iraqi govenment, which dares not to venture beyond the refines of the Green Zone in Baghdad), if “kicking ass” is targeting civilian structures with military hardware, then George Bush proves that he indeed reunites the worst qualities of the cowboy clown-statesman the world feared back in 2000.

If “kicking ass” is seeing the British troops pull out of Basra, claiming victiory when anyone who knows anything about Iraq is aware that Basra is ruled by a myriad of feuding gangs of criminals and Islamic extremists, if “kicking ass” is knowing that the US occupation forces are scared to engage the enemy, that they are leaving more and more areas in the hands of extremists and dare not venture far from their encampments and convoys, then George Bush has no idea as to the reality in Iraq today.

In Iraq today, there are four million refugees. In Iraq today, seventy per cent of the country’s children are not attending school. One million people have died as a result of the Bush regime’s act of butchery.

In Iraq today, one third of the population (24 million) need emergency aid. In Iraq today, most of the attacks do not come from Islamist terrorist groups against the population, but indeed, 85 per cent of attacks are against occupation forces or the invisible army of “collaborators”. These are the 200.000 mercenaries or “private contractors” (in addition to the 170.000 US troops) whose casualties do no count in the statistics. (The private contractors operate with a guarantee of immunity from prosecution).

These attacks number some 150 per day and occasion up to 5.000 victims each month, not the watered-down statistics presented by Washington.

In Iraq today, 70 per cent of the population has no access to drinking water, after the supply was targeted by US military aircraft and after rebuilding contracts were allocated without tender to the clique of corporate elistists gravitating around the Bush regime and keeping it in power at the expense of its hard-working citizens.

In Iraq today, 43% of the population lives in “absolute poverty” (Oxfam), 50% of the population is unemployed, 2 million people live in precarious conditions without access to food aid, 40% of the country’s qualified personnel have left, the country’s thousands of years of cultural heritage lie in ruins, 2.5 million citizens live in refugee camps abroad, half a million of these being children, who remain without any access to education.

In Iraq today, child prostitution (unheard of under the Government of President Saddam Hussein al-Tikriti) is a growing phenomenon, women have lost practically all their freedoms and since 2003, there are 50.000 new prostitutes. Iraq today constitutes the world’s fastest-growing refugee crisis, with 40 to 50.000 people fleeing there homes every month.

If this is “kicking ass”, then congratulations, Mr. Bush, on the wise way in which you have invested the hard-earned hundreds of billions of dollars your citizens pay in taxes. Maybe two years after Hurricane Katrina, as much money has been pumped into New Orleans, or could it be that the Hurricane acted as an excuse for the corporate elitists which gravitate around the Bush regime to have taken advantage of the chaos and bought up huge tracts of cheap land for development projects?

Is this freedom and democracy, winning hearts and minds with shock and awe tactics? Or should the guy who claims to “kick ass” have his “ass” kicked?