Another case of military neo-colonialism, the backbone of Washington’s foreign policy, backfires and blows up in the Bush regime’s face – the majority of Czechs and Poles do not want the USA’s missile defence shield on their territory because it will bring their international reputation down to US levels. Environmentalists alerted over special protected site in Czech Republic. 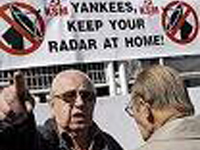 Protests in the Czech Republic, a damning opinion poll in Poland, fruit of the neo-colonialist, neo-imperialistic, gung-ho, arrogant, chauvinistic foreign policy of the Bush regime, wholly owned and controlled by the clique of neo-fascist sycophantic corporate elitists which gravitate around the White House, holding its policies and the American people in a vice-tight grip as it uses their money and abuses their trust.

In the Czech Republic, a protest march held this weekend joined together hundreds of angry demonstrators, who marched to the site where the US radar system is to be installed, namely in a protected natural area at Brdy. Josef Hala, one of the organizers of the No to Bases group, stated that “This is not a matter of politics...We want the people who have never been there to see it. There is wonderful nature there, they should understand why we protect the area”.

The opposition Social Democratic Party is against the installation of the radar system on Czech soil, a position shared by the majority of the Czech population, according to opinion polls.

The percentage of Poles against the deployment of US interceptor missiles on Polish territory has risen from 55 to 56 per cent, according to the latest survey carried out by CBOS polling centre in Warsaw. Only 28 per cent of those polled favour the plan.

70 per cent of the poll stated that the Polish Government had not done enough to inform the people of the plans, 34 per cent claim the shield will damage Poland’s international reputation and 32 per cent claim it would weaken Poland’s standing within the European Union.

It is not without reason that Latin Americans are refusing to be called simply “Americans” and request the use of the adjective North Americans because they are ashamed of being associated with their neighbours to the north, due to the murderous criminal activities of the Bush regime and its cowering clique of sycophants abroad.