We Americans developed a very good manual for torturing "leftist rebels," i.e. anyone who opposes "free trade" and organizes themselves enough to be a threat

When Jonathan Swift wrote "A Modest Proposal" in 1729, suggesting that the poor eat their own children and thereby solve the twin problems of poverty and hunger, the obvious satire was missed by some who actually supported his proposal. The same danger exists with "High Time for Torture," a satirical piece that reveals the absurdity of torture as a sanctioned policy by extending it to its logical limits. The writer, an American author and speaker who explores the implications of technology, religion, and science for 21st century life, evokes vivid images of using torture in the workplace and the home to show that torture flourishes only when people can not hear, see or smell its real-life consequences for flesh-and-blood human beings. This article is a non-ideological cry of outrage. 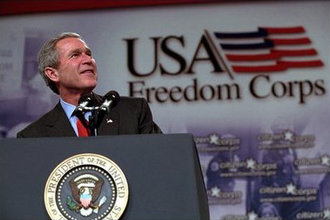 Torture is all the rage these days, getting plenty of ink in the liberal press, as if it's something new. It's not. We have been torturing one another for centuries. Our intelligence professionals have perfected the means and the methods and have created opportunities for learning how to do it right. Torture, from beating, lacerating, electrocuting, raping and breaking individuals in hell holes to quietly standing aside while genocide takes place, is ho hum. By treating it as something special, the discussion of appropriate policies governing torture has been distorted.

Hence this essay to right that wrong.

First of all, torture is widely practiced. We Americans developed a very good manual for torturing "leftist rebels," i.e. anyone who opposes "free trade" and organizes themselves enough to be a threat, and we trained people in how to do it. I spoke to someone recently who had wandered into torture training classes complete with chalk diagrams on the blackboard and arrows pointing out pressure points. I talked to an interrogator from Guantanamo who smiled and shook his head when presented with government statements about the humane treatment of "enemy combatants." So let's stop talking about Abu Ghraib and related "atrocities," as they are called by the leftwing media, as if they are anomalous. Atrocities are not anomalous. They're as common as fumbles when the Packers are playing.

Secondly, despite a significant number of voices in the chorus proclaiming that torture is not a good interrogation technique (let's face it, when the electricity is coursing through your genitals and the man in the black hood asks if you want some more, you'll say anything to staunch the juice; and the best interrogators say they prefer what is called the Scharff method after the sophisticated NAZI interrogator Hans Joachim Scharff who showed how empathy, understanding, and patience often turned the most recalcitrant captive into a good source of information) despite all that, torture must be good for more than recreation because even those who say it's ineffective continue to authorize, execute, and cover up its use.

Now, part of that may be the fun factor. Totally dominating another human being can be fun. One source explained that torture has long been practiced in other countries with Americans as coaches (to use the current buzzword), if not participants. He named a lot of countries where we did this, including El Salvador, Cambodia, Chile, Iran, South Vietnam, Guatemala, Argentina, Israel, and Egypt. We could double that list, at least, with countries in our own hemisphere (the Monroe Doctrine gives us permission to do that, and now the Monroe Doctrine is applied to the world and beyond, we apply it to space all the way out to the asteroid belt). For some, torture is just work. But for others, torture is fun.

Take the Uzbeks, for example. One source with a long history in military intelligence said it was a novelty when the Uzbeks learned that one purpose of torture might be to elicit information.

But I digress.  The point I want to make is that we have been engaged in torturing people directly or through proxies, here, there and everywhere, for so long, that torture ought to commend itself to all thinking individuals as an appropriate methodology for (1) getting the truth out of people quickly and efficiently, and (2) disciplining unruly children and adults alike, as is when is.

I propose that we apply the lessons of torture in ways consistent with our actual practice, notwith the cover stories we invent so the squeamish can sleep at night.

Torture should be used first in the basements of police stations, in prisons, and in schools, places where we have nearly total control over prisoners, inmates and students now. Torture has been in fact routinely practiced in many of those places and when, for example, white police attach wires to a black man and let the good times flow, subsequent protestations are widely ignored. So this extension of current practice would be a seamless splice.

Once the efficacy of torture in those environments has become clear to a desensitized population, it can be extended into homes and businesses where discipline is a must but achieving it efficiently has been denied to executives and parents. (Desensitization training is a must. When the CIA trained assassins for assignment to embassies where they would be ready at hand, they were compelled to watch hours of atrocities, their heads immobilized and eyelids propped open, until they no longer had an emotional response to killings, mutilation and so on.)

Imagine that you ask your child what they've been looking at on the Internet and you get an unsatisfactory answer. Now all you can do is shut them up in a room with a computer, a television, a cell phone with conference calling, all the comforts of home. But if you could take them down to the basement and wire up the auto battery or break the little darling's arm and hang them from it for a few days as we do in Iraq, can you imagine how quickly you would know what Junior was browsing?

Or imagine an executive faced with employees who threaten litigation on some politically correct mini-point of contention every time they're told to work. Instead of having to listen to that smarty-pants voice, you just tie their hands to opposing cubicles and shred that designer blouse with twenty or thirty bloody lashes like they do in Afghanistan. Do that a couple of times, making sure the rest of the crew has to watch, and you'll have a hard-working corps of workers with the right attitude in no time.

The truth is, people are overly squeamish about torture. We need to ramp up public exposure to what we really do and get people used to the sounds and smells. Those pictures from Abu Ghraib were well-scrubbed. They only showed men being abused in mostly passive humiliating ways. Pictures of women being raped and the sounds of children being sodomized were locked away. Trials of low-level personnel were quick and quiet while responsible policy makers were ignored. For heaven's sake, it required a trained physician going through autopsy reports to discover that "natural death" upon "natural death" was a cover for torturing people to death. That's inexcusable. I think we Americans have stronger stomachs than that and the collusion between media and military to sanitize the truth is inappropriate. If they can take it, hell, so can we!

You would be surprised how many people would enjoy it. Listen to the words of a medic who described his feelings while beating prisoners during service in Iraq: "You get a burning in your stomach, a rush, a feeling of hot lead running through your veins, and you get a sense of power. ... Imagine wearing point-blank body armor, an M-16 and all the power in the world, and the authority of God. That power is very attractive." (quoted from the forthcoming book by Dr. Stephen Miles, Oath Betrayed: Military Medicine and the War on Terror).

The lessons of torture are matter-of-fact. Torture is widespread, obviously effective or we wouldn't use it so much, and to many practitioners either a rationalized, neutral event or something they really like. Adapting torture to more general use in society would quickly pay dividends. Students would stop mouthing off, employees would stop suing bosses, suspects would confess, and children would obey their parents.

I think it is high time we use torture whenever and wherever. Initial opposition will quickly drown in a sea of screams and resisters will learn that the fact of resistance marks them for the next session. We have the tools, we have the techniques, we have lacked only the will to do what works to straighten out our bent society once and for all.

I highly commend torture to everybody.