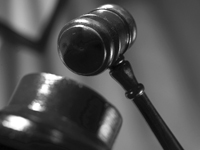 Tragically, this judge’s observation came too late to save an unjustly imprisoned man named Maurice Carter. An African-American from Gary, Indiana, Carter had the misfortune of visiting Berrien County, Michigan around the same time a white, off-duty police officer from the City of Benton Harbor was shot and wounded. Benton Harbor is an island of minorities, primarily African-Americans, most of whom live in poverty just a few miles away from the multi-million dollar mansions lining Lake Michigan’s shoreline.

A drug dealer, seeking a reduced sentence, told police a few years after the shooting that Carter had been involved. Though this dealer later recanted and was convicted of perjury, Carter still went to trial in front of an all-white jury. Even though an African-American woman, who observed the shooter for several minutes when he patronized a local store, had testified the shooter was not Carter, the jury chose instead to believe white witnesses whose “identification” was based on fleeting glimpses of the perpetrator running from the scene.

Because he maintained his innocence, Carter was consistently denied parole. Finally, dying of a liver disease brought on by the lack of adequate medical treatment, attorneys petitioned for his release.

Despite having served more time for his alleged crime than most guilty people, a prosecutor still argued that the dying Carter should remain in prison, while the judge hearing the petition joked about the severity of Carter’s illness. When a reporter asked the prosecutor why, as a person, she couldn’t support Carter’s release, she replied, “I didn’t come here as a person.”

Eventually Michigan’s governor commuted Carter’s sentence, but his conviction remained on record. He enjoyed only three brief months of freedom before dying from the disease the State so concerned about the “sanctity of life” had given him.

To show how easily the young men in the Duke rape case could have been convicted, particularly if they were African-Americans, one need only look at the tragic case of James Waller. Waller served ten years in prison for sexually assaulting a young boy. The “evidence” against him was his misfortune to be the only African-American living in the same apartment complex as the boy, and his even greater misfortune of shopping in the same convenience store as the victim, who, upon hearing Waller’s voice, suddenly “recognized” him as his attacker. Waller recently became the twelfth person exonerated through DNA evidence in Dallas County, Texas.

Of course such a scenario is not unique in Dallas County. Prosecutors in this county were once instructed about how to “legally” keep African-Americans off of juries, and there have been more exonerations because of wrongful convictions (thirteen) in this county than have been experienced by entire states. Not surprisingly, this county resides in the same state where former governor George W. Bush originally exposed his bloodlust and lack of concern for justice by arrogantly proclaiming “no innocent person had been executed under [his] watch.”

Before continuing this article, it is important to stress that it is not meant to be a polemic about what legal elements need to be present in sexual assault cases, but simply an illustration of how ironic it is that Mike Nifong may have avoided disbarment if he had not tested the DNA evidence, and/or if the accused were African-American and poor.

But why do those responsible for the preservation of “law and order” permit such injustices to occur? The answer is simple: BECAUSE THEY CAN. The Amerikkkan legal system is designed to protect its own.

This is why a sleeping Fred Hampton, leader of the Chicago area Black Panther Party in the late 1960s, could be extralegally executed by police during a raid on his apartment. This is why former Chicago Police commander Jon Burge has never faced charges, and continues to draw a police pension, even though he oversaw the use of torture that sent several innocent men, primarily minorities, to death row. This is why, in the same region, a “good-old-boy” jury acquitted prosecutors and police officers who had used perjured testimony to send two innocent Hispanic men, Rolando Cruz and Alejandro Hernandez, to Illinois’ death row. But the jury was not satisfied with simply acquitting the defendants; they partied with them afterwards, as if conspiracy to commit murder was something to celebrate.

This is why authorities knew they could deny Black Panther Dhoruba Bin Wahad’s request for legal documents during his years of wrongful imprisonment, simply by telling him such documents “did not exist.” This is why telephone records proving that former Panther Elmer “Geronimo” Pratt was innocent of the crime he was convicted of “mysteriously disappeared.” This is also why the prosecution in Pratt’s case did not hesitate to use the perjured testimony of an informant. And this is why the courts keep American Indian Movement (AIM) activist Leonard Peltier imprisoned, despite evidence that crucial documents were withheld from the defense.

Some have argued that the solution would be to have more minorities working in the legal system. Yet such people, once in the system, are often more detrimental to members of their own race than white prosecutors and judges.

A conservative newspaper in Berrien County made this argument in the Maurice Carter case by proclaiming that several of the officers responsible for Carter’s conviction were African-American. What this paper failed to acknowledge, however, is when minorities become involved in the law enforcement/legal system, they often are more concerned about pleasing and appeasing the white power structure than focusing on truth and justice.

I have seen cases where African-American attorneys accepted money from white prosecutors simply to sit by their side when there was an African-American defendant or the prospect of a mixed race jury. Yet rarely, if ever, did these attorneys bother to learn the facts of the case, even though their presence exponentially enhanced the chances of an innocent African-American going to prison.

Some of the police officers involved in the Fred Hampton and Mark Clark murders were African-American; Thurbert Baker, the State of Georgia’s Attorney General, is African-American, and he persists in keeping a seventeen-year-old African-American man in prison for having consensual sex with a fifteen-year-old girl, despite a judge’s ruling that the young man be released.

But even more vile is the self-loathing antics of the Supreme Court’s lone African-American member, Clarence Thomas. Now that Thomas has “gotten his” through programs designed to remedy racial discrimination, he has persistently and callously joined with his racist colleagues in destroying these opportunities for others.

Meanwhile Condoleezza Rice spews platitudes about human rights and democracy in oil-rich Iraq, while the very racists she works for turn a blind eye to the genocide of impoverished Africans in Darfur. And the Attorney General of the United States, Alberto Gonzales, has repeatedly demonstrated that he is little more than a lying, torture endorsing, civil liberties hating thug who is more concerned with his selfish grip on power than the good of the nation.

So don’t be deceived by the Supreme Court’s disingenuous talk of a constitution that is “color-blind.” Its interpretation of that constitution has resulted in a legal system that exploits racism at every turn, be it through the disproportionate incarceration of African-Americans, the racial make-up of juries, prosecutorial decisions about whether to file criminal charges, and the severity of those charges filed. A white person’s misdemeanor is often an African-American’s felony, even though the fact patterns are identical.

Today there are people of all races cheering the overturning of Brown, alleging it will restore “neighborhood” schools and a sense of community. But the Supreme Court has also ruled there is no constitutional right to an education, and therefore no right for school districts to demand equal funding. When poorer school districts eventually discover that this ruling will make them incapable of purchasing the resources and materials enjoyed by schools in wealthier neighborhoods, will they still be cheering the de facto segregation endorsed by four wealthy white men and a self-loathing African-American whose black robes conceal the white robes and pointed hats they should really be wearing? If and when this cheering stops, will America be able to undo the damage these so-called “justices” have done?

The overturning of Brown will serve as an enduring reminder of the evils foisted upon America by the Bush dictatorship. This dictatorship divided the nation, and undermined democracy, by stealing two elections. It divided the nation again with its lies about the war against Iraq. But it is its impact on the United States Supreme Court that gives this dictatorship the power to make evil and divisiveness a permanent fixture throughout the land, and it has done so by setting America back upon the pathway of once again becoming “separate and unequal.”