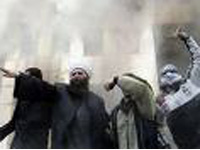 With the state of chaos in the State of Iraq and the renewed attempted terrorist attacks in the UK, it is clear that the clash between civilizations that everyone has been told to avoid saying is finally here, prompted by the irrational short-sightedness of the NeoConservative clique which dominates the Bush regime. Time for dialogue before it is too late.

Almost sixty years ago, the Palestinians were thrown off their lands and out of their homes, after western powers yet again drew lines on maps and dictated frontiers which were not theirs to dictate. Thirty years ago, the Moslem community around Leeds and Bradford in the United Kingdom was already making the headlines for living in segregated communities which were not integrated into British society.

In neither case has any tangible movement been made. Quite the contrary, due to an absence of movement, positions have radicalised among those with nothing to lose and everything to gain, through the last resort, terrorism. The globalisation of terrorism is a phenomenon called Al Qaeda.

Terrorism is the epitome of failed dialogue, where positions descend into the hatred which breeds the desire to kill and maim as many victims as possible. Terrorism is also a business which engenders arms trafficking, protection racketeering and an endgame involving always a least two players. It takes two to tango.

Terrorism can never be condoned, whatever form it takes, be it a western child disembowelled by splinters of glass in a shopping centre or airport, or an Iraqi child having its limbs blasted off by a bomb dropped by an American pilot. This is why the illegal act of butchery in Iraq was so fundamenally wrong, because it gave a cause to those who would do the same, respond in kind and how predictable all of this was.

Britain today faces the same threat it faced decades ago, when IRA terrorists, funded by NORAID, based in the USA and strong in New York, blew people up indiscriminately. Faced with a prolonged war of the worlds, a clash of civilizations in which the deepest of banners – religion - is raised, there are troubled times ahead.

Al Qaeda will not simply disappear. It will persist, because it has all the prerequisites to fuel a long-lasting terrorist campaign: a cause (justice for Islam in general and for the Palestinians in particular) and a huge supply of new recruits. In Iraq, attacks by Sunni and Al Qaeda insurgents are deadly and highly professional. In the UK, they are amateurish and botched. Today. Tomorrow, they will succeed and the British people will be ruing the day when their Prime Minister took them on a tandem ride to hell with Washington’s Neocon regime, controlled by the energy and weapons lobbies.

However, the troubled times ahead are no reason to gloat, more a cause for concern and a time for trying to find solutions, given that the governments which embarked on this ludicrous crusade in Iraq have lost any hope of finding a way out.

First and foremost, all the main religions in the world stress the importance of preserving life and the need to respect the integrity of the human being. Therefore any reference to religion is an absurdity in this clash. The bottom line is that while there is no lasting peace settlement in the Middle East, in which Israel relinquishes its claim to lands which never belonged to it, and under which all members of the international community recognise Israel’s right to exist within its original frontiers, Al Qaeda will always have a cause to fuel the flames of hatred. The fire was spread by Washington’s ill-planned adventure in Iraq and the flames were fanned further by acts of torture, rape, murder, the concentration camp at Guantanamo, and acts of state terrorism in Iraq and Afghanistan.

So it is time for dialogue, debate and discussion, the formation of think tanks to study the underlying causes of the phenomena which grip our civilizations today in a vice-like hold in which all players stand to suffer in a lose-lose situation. Unilateralism and arrogance have made the situation worse. Only though a multilateral approach, based on the rule of law and involving all the players in a process of dialogue can any progress be made.

Speaking about winning hearts and minds after shock and awe tactics were used in Iraq, when children’s limbs were blasted off them, when women and babies were projected through their living room windows, when boys’ and girls’ faces were blown off by cluster bombs deployed in civilian areas, when Iraqi girls were raped and ridiculed by American soldiers, is an insult to the collective intelligence of mankind.

Speaking about mutual recognition and respect and a whole-hearted commitment to dialogue to build bridges between the Islamic and non-Islamic worlds makes great sense at this delicate time in our history, otherwise what future will we have built for our children and grandchildren?