How telling that George W. Bush is welcomed in countries vying to crawl round Washington’s feet for hand-outs – and nowhere else. The Governments of the Czech Republic, Poland and Bulgaria are eager to host the Missile Defense Shield and Tirana’s dream of a Greater Albania has Washington’s nod, despite 500 years of history – and common sense – being against any form of Independence for Kosovo. 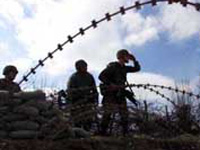 It is hardly surprising that the red carpet was rolled out for George Bush in these four countries, whose Governments welcomed him with open arms. His reception was noticeably cooler among Germans and Italians, however. What have almost seven years of the Bush regime’s diplomacy produced?

Diplomacy is supposed to be based on debate and dialogue, fundamental precepts of democracy in a multilateral and civilised New World Order. Yet the tools which the Bush regime has used since the beginning are not diplomatic: instead, they are based upon arrogance, bullying and cajoling, an ABC of how not to manage crises and handle international relations.

It began with Colin Powell – a nice man, fathoms out of his depth as Secretary of State, or else handcuffed by Bush’s Rottweilers, Cheney and Rumsfeld – whose claim to fame was lying through his teeth at the United Nations building in New York with reams of unadulterated drivel about Saddam Hussein’s famous Weapons of Mass Destruction.

It continues with Condoleeza Rice, magnificent National Security Advisor prior to, and during, 9/11 and then as Secretary of State, ranging from invisible and inaudible to being the oracle of extreme arrogance, deriding her partners in the international community with a holier-than-thou approach bordering on insolence.

And what is the result?

As if Iraq were not bad enough (and it is not intended to rub any more salt into the festering wounds caused by, at best, this criminal act of gross negligence which has resulted in the wholesale destruction of the State and the lives of hundreds of thousands of people, leaving millions destitute), now George Bush intends to stir up the Balkans again by making the most dangerous miscalculation of his already disastrous Presidency, granting Independence to the nerve-centre of the Serb psyche, Kosovo, which is precisely where the Serb nation began, precisely at the Battle of Kosovo Polye in 1389.

Kosovo Polye is the heartbeat of Serbia, Kosovo is Serbian and Kosovo is for the Serbs. Period. Anyone who states anything to the contrary either knows nothing about Balkans politics (which outsiders should leave well alone) or else has fallen prey to the diatribes of those which embraced the drug-trafficking, prostitution-rackeering darling Ushtria Clirimtare e Kosoves (Kosovo Liberation Army) and who embraced them? The US House of Congress!

Through Kosovo flow drugs (heroin, through Turkey, from Afghanistan), through Kosovo flow human trafficking rings (many were the Kosovar Albanian women trying to reach the Serb lines to avoid being transported across the sea to Italy, sold to the Albanian mafia), through Kosovo, or rather because of Kosovo, Washington is set to make yet another monumental error of a gigantic scale.

How would the people of the United States of America feel if their southern states had been the objective of foreign women, travelling there simply to give birth, and to give birth not to one, two or three children, but to ten, eleven, twelve or fifteen, and who, using the birthright as a tool, then called every family member, close or distant, to push out the original inhabitants?

How would the people of the United States of America feel if the inhabitants of their southern states were then bombed and forced out of their homes because the international community decided that the new residents had rights over the original ones?

Answer: probably the same as the Kosovar Serbs, forced out of their homes by Islamic terrorist Shiptari activists (KLA) and when they tried to defend their homeland, the heart of their nation, were attacked by NATO, led by Washington, Queen of International Liars.

And George W. Bush is trying to put the ears on the effigy of the Devil: an independent Kosovo. Imagine an independent Aztlan (the southern states of the USA). It is exactly one and the same thing.