In their report Growth and Responsibility in Africa, the G8 member states pledged themselves to a “stable, prosperous and democratic Africa” and committed themselves to Africa achieving the Millennium Development Goals by 2015. 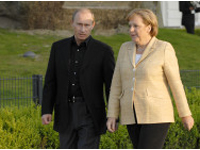 Two years ago, after theGleneagles Summit in July 2005, the G8 leaders agreed to a massive debt reduction package for Africa and promised to provide 25 billion USD in aid by 2010. At the end of 2006, only 2,3 billion had been collected.

In the case of Russia, much has been done in recent times to help African nations develop. On 25th May, Africa Day, Sergei Lavrov stated that the Russian Federation has written off 11.3 billion USD of debt from African countries, while Moscow pledged itself to increasing trading relations with the African continent by half a billion USD by the end of this year. Moscow is conducting ongoing negotiations with African nations to write off all the debt owed by Heavily Indebted Poor Countries in Africa by the end of the year. The total debt owed to Russia by African nations is 20 billion USD.

The Kremlin is committed to helping Africa through economic relations and not just through development aid (through which funds often move between foreign banks and are not applied where needed) and to writing off the debt owed to the Soviet Union.

The G8 pledge to Africa

At Heiligendamm, the G8 countries reiterated their pledge to achieving the Millennium Development Goals by 2015 and underlined their “strong interest in a stable, democratic, and prosperous Africa”. To this end, the eight nations promised debt relief programmes of 60 billion USD, to increase ODA by 2010 to 50 bn. USD per annum and to implement a set of measures to foster sustainable development, promote growth and investment to combat disease and hunger, while strengthening peace, security and good governance.

The approach adopted by the G8 will not be a top-down one but rather through the African Peer Review Mechanism. The APRM is an approach under which African nations appraise each other’s development and make suggestions.

Africa is a great cause for those who wish to project images of themselves as do-gooders, patting children on the head, making promises of development aid, broadcasting to the world that they are friends of Africa and glowing in the laurels they receive as a result. Then when the time comes to put words into actions, it is clear that the whole exercise was a publicity stint and no more than hot air. It happened after Gleneagles. Let us see whether anything comes out of Heiligendamm.