A critical moment in history

The Western reaction to the words of Vladimir Putin is, as predictable, immature, ignorant, jingoistic and biased, since it does nothing to analyse the causes of Russia’s reaction to what can only constitute a provocation. This is a criical moment in the history of Europe and the world, and one which requires more diplomacy, dialogue and debate than drum-beating and harking back to Cold War rhetoric. 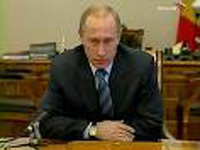 A critical moment in history

To every action, there is a reaction. This is a basic law of physics and one which is so patently obvious, it goes without saying. Not so, however, for a huge number of western Press outlets which seized upon the words of President Vladimir Putin regarding pointing missiles at Europe in response to the USA’s belligerent, aggressive and antagonistic attitude towards international relations, painting Russia as a threat and saying nothing about the causes and origins of Moscow’s stance.

Nothing was said of the USA’s recent history in international relations, namely the illegal act of butchery in Iraq based upon lies. War crimes have been committed, hundreds of thousands of civilians have been murdered, Nazi-style torture chambers and concentration camps have been set up, yet how many media outlets in Europe raise an eyebrow? Few, because many western European countries also have blood on their hands by giving Washington the nod.

Nothing has been said of Washington’s unilateral decision to pull out of the ABM treaty in 2002 and to instal nuclear missile defence systems on Russia’s borders, nothing has been said of NATO moving its frontiers to Russia’s own, installing antagonistic military attack systems on software in its new member states and performing the massive upgrading of weapons systems within striking distance of the very heart of Russia.

So what is Russia supposed to do? Stand by with its arms folded and say nothing? Or react and re-establish a proper and harmonious balance of power?

Needless to say, Russia’s military capacity to defend itself is second to none, and always has been. Hitler and Napoleon learnt the lesson the hard way. Today, Russia has every capacity to neutralise and liquidate any NATO build-up anywhere on the planet and everybody knows that and needless to say, Russia’s military equipment from Soviet times is intact – it has not simply disappeared and indeed, it has been upgraded.

Yet this is not the point. The point is, that the United States of America, the only power to have used nuclear weapons (and against civilians), is in the process of performing a military build-up on Russia’s frontiers and given the past history of US imperialism, given the fact that Washington is today the Queen of Liars, who can tell Russia that this does not constitute a potential threat?

Therefore those who criticise Russia for reacting would do well to start criticising those who caused the reaction – the United States of America. What are its military forces doing in Europe anyway, if not defending the arms lobby which dominates Washingon’s foreign policy? When will the Europeans stop crawling around Washington’s feet?