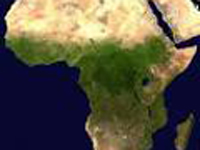 25th May is Africa Day, commemorating the date when the Organization of African Unity was set up in 1963. In July 2002, this organization was replaced by the African Union. 44 years on, what is the significance of Africa Day? Is it just another day, just another cause for the rich and powerful who use Africa to feather their own nests to make another pretty buck or has something actually been achieved?

While it is true that the media per se do not create situations, they certainly reflect the underlying currents in international movements which created the possibilities for the situations to arise. Let us take for example the coverage of Africa in the international media since May 25th 2006 and what do we see?

In a word, optimism. We can discount for a start two types of international media – those which concentrate on gloom and doom stories, painting a negative picture of Africa, because it feels good to have somewhere worse off, and also those who use Africa like pimps and ride it like a prostitute, the pimping press, making a living out of bribing Africans to award advertising contracts and who therefore paint rosy pictures which do not correspond to the truth and which hold zero credibility; outlets sustained temporarily by their own corrupt practices.

As always, the truth lies somewhere in the middle.

And the truth today is that for the third year running, Africa is on the agenda of the G8 Summit. The achievement of the Millennium Development Goals is being registered by numerous international organisms and guidelines are being drawn up to monitor the progress made. Finally, Africa is consistently in the public eye.

True, also, that in 2007, irresponsible use of force and abuse of power have been noted by international organisms (reported exclusively in the gloom and doom press and omitted spectacularly in the pimping press) in Angola, Sudan, Equatorial Guinea, Kenya and Nigeria. True, torture and illegal acts of slaughter have been perpetrated in numerous countries in this continent. True, journalists have been persecuted, women’s rights have been violated and human rights have been ignored in an unacceptable number of African countries between 2006 and 2007. These stories wil be rife in the gloom and doom press and absent in the pimping press.

However the broader picture points towards more and more Africans taking their own destiny in their hands, more and more Africans feeling the calling to return to their continent and to engage themselves in nation building, even if this means they have to make personal sacrifices. By Africans, we do not mean those Europeans who use Africa as a business card while insulting its citizens at every turn.

Africa begins to breathe a common breath, the breath of collective responsibility, collective sacrifice and collective development. Unlike many other parts of the world, the notion of collectiveness is heartfelt in Africa and it is this notion which will, in the near future, silence its critics and relegate into insignificance those who play games at the expense of others. And those who play games and make a living at the expense of Africa are about to receive a rude awakening. This is the best legacy of Africa Day, 2007.