A week ago Pope Benedict XVI was in Brazil reaffirming the same crucial message he stressed on the eve of his election to the papacy in April 2005. At that time the Pope spoke of an insidious trend that is threatening society. "We are building a dictatorship of relativism that does not recognize anything as definitive and whose ultimate goal consists solely of one's own ego and desires." The Pope’s comments, which allude to man’s increasing rejection of God and of absolute truth, are becoming more pressing and deserve further reflection. 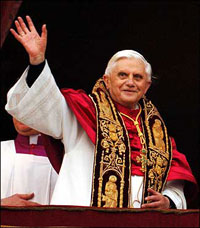 It is clear that the principal players generally responsible for building and maintaining this dictatorship are politicians and mass media. One of their main reinforcement mechanisms involves perpetuating inconsistencies in civil law and practice. One such example of a gross inconsistency has to do with the killing of a mother who is carrying a child. In certain instances the murderer is charged with the death of two human beings - both mother and child. However, if a woman exercises her so-called reproductive rights and has an abortion, the law clearly determines that no crime of murder has been committed. Thus a human life is inconsistently seen through the eyes of the law as being both precious and simultaneously expendable without value.

In addition to this inconsistency, another approach used by those who would dictate relativism to the rest of us consists of linguistic re-definitions, euphemisms, and other anomalies. Language, as the philosopher Heidegger said is the "house of being". If our language is contorted and deconstructed beyond fixed meanings then the being housed by language becomes indeterminate.

Today, our society speaks of openness and tolerance as supreme virtues. But to be open in such a manner means precisely to be closed to the objective truth. If one were to claim the existence of objective truth one would be labeled by society as being closed and arrogant rather than as open and tolerant. So go the language games. This euphemistic approach is perhaps best captured by the words "late-term abortion". This phrase covers up the fact that a partially born human is brutally murdered in the process of being born. "Pro-choice" is another such euphemism, synonymous with abortion, that causes us to forget the baby entirely. Even the term "truth" itself has been replaced by the word "transparency" in our public discourse.

Language games are very dangerous. We are at the point where, because of in-vitro fertilization, surrogate motherhood, and all that flows from these, the word "mother" is losing its meaning. In some cases there is a genetic mother, a gestational mother and the mother who actually raises the child to adulthood. When we move to the re-definition of marriage to include options other than one husband, one wife, and onelifetimewith openness to children, we find ourselves in very troubling waters for the family is the fundamental cell of society. The dictatorship of relativism thus gains strength from the outrageous manipulation of language. If we are to overcome this dictatorship with true democracy we are going to have to regain control of the use of language so as to point to the objective truth.

Our response should be to seek the embodiment of Natural Law in the civil law. Natural Law is that law written on the human heart which can be known by every human being through reason alone. The first proposition of Natural Law is the existence of God. Today many make the narrow claim that the only real truth is scientific truth. This serves the cause of relativism because scientific truth is subject to paradigm change whereas objective moral truth is not. Apart from science, however, there exists a variety of philosophical and logical arguments for the existence of God.

The second proposition of Natural Law teaches us that every human being has a priceless and unique human dignity. Even apart from religious faith there are many modern and contemporary philosophers who have arrived at the conviction that a person is an end in himself or herself and never a means to an end.

As we reflect on human anatomy and the desire of every human being for social relationships and intimacy, the third proposition of the Natural Law teaches us that marriage means a one flesh communion of one husband, one wife, for one lifetime with openness to children. Artificial contraception and abortion though quite different morally are not behaviours which someone has a right to choose. To be sure one is able to choose them but there is no objective right to do so.

Ultimately, we must reclaim the proper use of language if we are to combat the dictatorship of relativism with its dogma of hedonism and its anti-life culture. We need also to insist that the existence of God, the dignity of every human being and the definition of marriage are not religious curiosities to be forced on the rest of the world. Instead they the are logical dictates of reason of Natural Law itself.

For our own time and culture let us proclaim with love the truth of Natural Law.