Only the American people in mass can effectively demand an end to such U.S. foreign policy

Say good-bye to the GWOT and, so far as the Bush administration is concerned, good riddance, too. This acronym for the “global war on terrorism” - often rendered “global war on terror” - an unpronounceable monstrosity with all the charm of the verbiage in a Pentagon planning document, never caught on with the public anyhow. So nothing is lost. 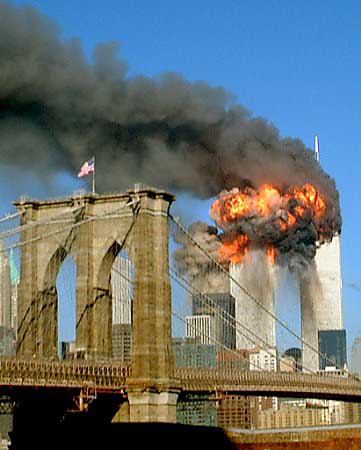 The question is: what does the administration seek to gain by relabeling its efforts as the “global struggle against violent extremism”? Is the shift to a new slogan nothing more than that, or does it signify a move toward a different approach to the government's ongoing exploitation of the “opportunity” the president's most influential advisers perceived in the events of 9/11?

The government's successive labels for its actions in response to 9/11 have attracted ridicule from the start. “War on terror” made no sense: you can't drop a bomb on an emotion. “War on terrorism” scarcely made any more sense, inasmuch as terrorism is not something you can blast with a howitzer, but a tactic available to countless millions of determined persons in one form or another. Evidently none of the government's public-relations geniuses ever saw any merit in the more sensible phrase “war on terrorists.” In due course, the GWOT came along, attracting it own share of ridicule (“gigantic waste of time,” and so forth). It did have the merit of emphasizing the worldwide reach of the government's actions, giving fair warning that nobody on earth can occupy a neutral zone, that anyone on the planet might be visited by a Predator drone's Hellfire missile if he raised sufficient suspicions at Langley.

Whatever the previous terminology's deficiencies in helping the government sell its program to the public, the latest shift of catchwords bespeaks a more substantial difficulty. Prosecution of the war in Iraq is going from bad to worse, and the slumbering public is finally beginning to rouse itself and to notice that something is amiss. Polls report continuing declines in public approval of President Bush's handling of the war. All the progress the government's spokespersons have ballyhooed since the beginning of the U.S. occupation has obviously failed to make a favorable impression on the legions of resistance fighters and suicide bombers in Iraq. Unless the people in the upper reaches of the Bush administration are even denser than they seem, they must understand that their “liberation” of Iraq is a bust, that they have placed U.S. forces in a hornet's nest, and that persistence in poking the nest only brings forth more hornets. If the Bush administration can't solve this problem, perhaps it can divert the public's attention from the government's manifest failure to fulfill its promise to establish a peaceful democracy in Iraq. Having failed to demonstrate any truth in its prewar claims about Iraqi weapons of mass destruction or in its repeated insinuations of a link between 9/11 and Saddam Hussein's regime, it now seeks to shift the focus away from the war it is losing in Iraq.

Politicians are always trying to deflect the public's attention from their policy failures. If the government's most recent terminological shift were nothing more than another instance of such political skullduggery, we might simply dismiss it as more of the same old same old. The explanations government officials have given, however, suggest that we may have more substantial cause for concern. The chairman of the Joint Chiefs of Staff, Gen. Richard B. Myers, asserts that although the government's current efforts rely heavily on military force, the threat “should be defined as violent extremists,” and therefore the solution is “more diplomatic, more economic, more political than it is military.” Does anyone doubt that the actual diplomatic, economic, and political measures the government intends to adopt will adversely affect a million ordinary persons for every potential terrorist those measures touch? By means of the actions authorized by the USA PATRIOT Act and by various other actions, the government has already taken a big bite out of our liberties since 9/11. Now it seemingly threatens to eat away even more of them by employing, in Myers's words, “all instruments of our national power.”

This threat seems only the greater when we consider the vagueness of the term “violent extremism.” Already we have seen that people who committed no acts of violence whatever, indeed who did nothing more than raise or transmit funds on behalf of charitable organizations or associate with certain persons in their neighborhood or mosque, have been treated as terrorists. Anyone who has bothered to read the anti-terrorism laws knows how elastic their language is, how far it may be stretched by a gung-ho FBI agent or an ambitious prosecutor itching for higher office. What, we may well wonder, will the government make of the term “extremism”?

We know a great deal about this matter already, merely from observing the conduct of U.S. politics. People are constantly being labeled extremists in the news media or in congressional proceedings. Even prominent, respectable men and women nominated for positions in the federal judiciary are routinely branded as extremists. Nothing is easier than calling someone whose views or actions go outside the 40-yard lines of American politics an extremist. Gone are the days when Barry Goldwater had the courage to stand before the world and declare that “extremism in defense of liberty is no vice.” Now the government seemingly seeks to equate extremism with terrorism. Nothing good can come of such a move. If the government can't even identify unambiguously the persons it aims to destroy, then it has no proper business mounting attacks.

Apart from the government's desire to divert the public's attention from the dire situation in Iraq and to repress alleged purveyors of extremism, key government officials have emphasized that the new slogan reflects a desire to wage a fiercer ideological war. They have in mind not the ideological war they wage ceaselessly against American citizens—they can scarcely wage that war any more fiercely—but the ideological war they wage against potential foreign perpetrators of terrorism against Americans and their allies. According to national security adviser Steven J. Hadley, “we need to dispute both the gloomy vision and offer a positive alternative.” Under secretary of defense Douglas J. Feith elaborates: “ultimately winning the war” requires “addressing the ideological part of the war that deals with how the terrorists recruit and indoctrinate new terrorists.” In short, U.S. policy makers intend to allay the terrorist threat posed to Americans and their allies by pursuing a public-relations program designed to persuade Islamic fundamentalists to surrender their present ideology in favor of a spiffy American-made alternative that offers a brighter vision and a positive alternative, much as a detergent manufacturer might offer consumers a product that will get rid of unsightly ring around the collar.

Should we laugh or cry? Are top U.S. officials this stupid? Do they have no idea how people come by their deepest convictions? Do they see no cause-and-effect in the relation between U.S. foreign policy and the reactions it predictably brings forth? Are they so accustomed to bamboozling the American public that they believe they can do the same to the people they are bombing, shelling, shooting, bullying, and humiliating every day in Iraq and Afghanistan or to the billions around the world whose local news media present less sanitized images and accounts of brutal U.S. actions than those served up by Fox News and the Wall Street Journal?

U.S. policy makers want to pursue a policy of global hegemony and to impress it with special force on the areas of the world located atop great deposits of petroleum or astride pipeline routes for transporting oil and gas to world markets. They want to prop up tyrannical but cooperative governments in places such as Egypt, Pakistan, and Saudi Arabia. They want to take Israel's side every time in the Israeli-Palestinian conflict. They want to position their armed forces in more than a hundred foreign countries and, in all too many cases, to employ those forces against politically aggrieved locals who might upset the status quo. Yet U.S. policy makers pretend to believe that in the midst of all their provocations of Muslims and other people far and wide, they can either kill or hoodwink those who resist and who fight back sometimes by terrorist means morally reprehensible in their own right, to be sure, yet nonetheless comprehensible. In sum, U.S. leaders seek to achieve the impossible.

Unfortunately, no matter how absurd this course of action may be in relation to achieving its ostensible public purposes, it serves the private interests of key parties in the upper reaches of the administration, the Congress, the military, certain sectors of industry (most notably military contracting and the oil business), and at the same time it caters to the ideological yearnings of neoconservative zealots and the religious fantasies of certain fundamentalist Christians.

Only the American people in mass can effectively demand an end to such U.S. foreign policy. At present, the people do seem, ever so slowly, to be coming around, although history shows that often they can be deflected from their natural tendencies by artful propaganda, bogus crises, or other political trickery. We can only hope that eventually the American people at large will weary of playing the patsies for their duplicitous leaders and tell them emphatically that enough is enough, that the government must change the policy, not the slogan